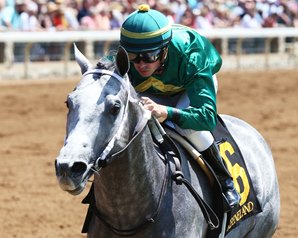 Eight juvenile colts each looking to pick up their first graded stakes win will battle in the 103rd running of the Grade 3, $150,000 Sanford on Saturday at Saratoga Race Course. The morning line favorite is Texas-bred Direct Dial at son of Texas stallion Too Much Bling of Valor Farm who sold for $105,000 at last year’s Texas Summer Yearling Sale.

Hall of Fame trainer Steve Asmussen will enter a formidable pair in Baffin for owners Corinne and William Heiligbrodt and Direct Dial for owner William Farish. Purchased for $170,000 as yearling at the Ocala Breeders’ Sale and a son of multiple graded stakes winner Justin Phillip, Baffin made his debut on June 22 at Churchill Downs besting a field of nine to win by an impressive 4 ¾ lengths.

“Baffin broke his maiden very impressively at Churchill in his only start,” said Asmussen. “I’m kind of concerned if he got enough out of it. He won very easily and is now stepping up into a stakes [race] but I think he deserves the opportunity.”

“Direct Dial has two nice races in him. A win at Keeneland and a nice second-place finish in the Tremont. I feel very good about how both have trained up here at Saratoga as well. Justin Phillip has been a very good horse for us and this is very first crop [so] it’s kind of exciting to see him pass that talent along.”

With Ricardo Santana, Jr. aboard, Baffin will leave from post 6. Direct Dial will be to his outside ridden by Jose Ortiz from post 7.

A five-time winner of the Sanford, trainer Todd Pletcher is no stranger to success with juvenile colts and will enter a talented pair of his own in Admiral Jimmy for Siena Farm and Bal Harbour for Red Oak Stable.

“Admiral Jimmy got a pretty good education in his last start,” said Pletcher. “He got a lot of dirt in his face and it took him a little while to adapt to that. Once he did I thought he finished well. Bal Harbour is coming off a good maiden win at Gulfstream in which he encountered a lot of traffic issues and he was able to overcome it. It’s a step up now to the big leagues and we’ll see where we fit.”

Hall of Famer John Velazquez will have the mount aboard Bal Harbour and will leave from post 2. Hall of Fame inductee Javier Castellano will be in the irons on Admiral Jimmy from post 5.