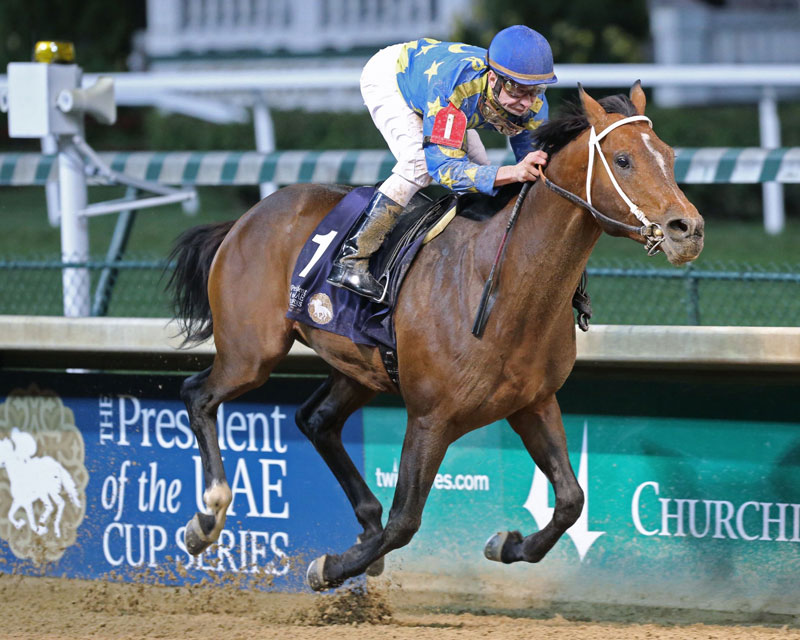 For the fourth time since 2011, a race for purebred Arabian horses – the world’s most ancient breed of equines – was staged at the world-famous Churchill Downs in Louisville, Kentucky, and the winner this year was a Texas-bred named Paddys Day who has raced at all three Class 1 tracks in the Lone Star State and is the reigning Arabian Horse of the Year. Owned by Quarter Moon Ranch LLC and trained by Scott Powell, the 5-year-old horse was ridden by top Thoroughbred jockey Calvin Borel in the $100,000 President of the United Arab Emirates Cup Sponsored by the Abu Dhabi Sports Council.

He paid $3.20, $2.80 and $2.10 as the odds-on 3-5 betting choice in the field of nine, and could be on his way to a repeat Horse of the Year title. This was his third Grade 1 win of the year after successful runs earlier this season in the $48,000 HH Sheikh Zayed Bin Sultan Al Nahyan Cup Stakes (G1) at Sam Houston in March and a five-length win in the $51,000 Delaware Park Arabian Classic Handicap (G1) two weeks ago on Sept. 10. He’s won five of eight starts this year. In addition to his stakes win this year at Sam Houston, he’s recorded stakes victories in Texas at Lone Star Park and Retama Park, and in Colorado at Arapahoe Park.

“He’s like a little Thoroughbred,” said Borel. “Every time I asked him, he put me in a spot. He’s very athletic and does everything like a Thoroughbred does. He ran a good race. He didn’t break as sharp as I thought he would. Once I found a hole I just picked my spot and he took off. I’m just happy to be back. I’ve won a few races this week so it’s back to rolling so everything’s going good.”