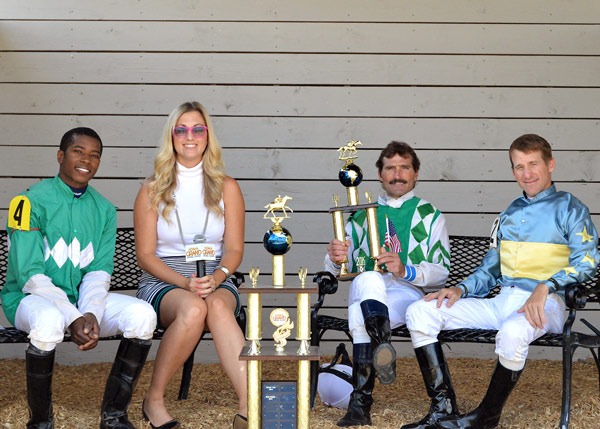 Team USA got out to an early lead in the third annual World Jockey Challenge at Indiana Grand Racing & Casino Saturday, June 25 and the rest of the countries could not close the gap. The team consisting of Tommy Pompell, Rodney Prescott, Malcolm Franklin, Martin Metcalf, Kaylia Albright, Perry Ouzts, Marlon St. Julien, Smitty Oxendine, Berkley Packer and Shanley Jackson won the first two races on the card and five overall to win the honor.

Pompell opened the 12-race program up with a win in the first race aboard Summer Chalet. Franklin added a win in race two aboard Ghostly Spaniard with Team USA finishing in the top three spots to jump out to a big lead early in the challenge. Team Panama, consisting of Dick Cardenas, Albin Jimenez and Marcelino Pedroza earned two wins early in the program and Leandro Goncalves, the only jockey from Brazil, also won two races prior to the start of four Quarter Horse races on the program that included a majority of jockeys from Mexico.

Team Mexico swept the top four positions in race nine to boost Mexico to third in the standings. Following Alejandro Luna’s win aboard Mavara Vegas in the ninth race, Jose Beltran returned for another win for Mexico in the tenth race aboard TF Jess A Leader to bring the score within nine of catching Team USA.

However, Packer of Team USA stopped the late charge by Team Mexico with a win in Race 11 aboard WRs Quick Eagle to boost Team USA into a secure lead once again and take home the title.

Team USA ended with 72 points over Team Mexico with 52. Team Panama, the defending champion, finished in third with 42 points followed by Brazil (31), Cuba (10), Peru (9), Venezuela (8), Italy and Puerto Rico. A total of 38 jockeys competed for nine different countries on the card.

All jockeys were introduced after the third race on the program during Opening Ceremonies for the World Jockey Challenge. Each team carried the flag for their country to the winner’s circle as music representative of their home country was played. Points were earned for the top four finishers of each race with 10 points awarded to first, five points awarded to second, three points for third and one point for fourth.

Team USA named Pompell as their MVP as Pompell scored two wins, both longshots, on the card. In addition to wins from Franklin and Packer, Ouzts also scored a win aboard Woodland Walk in the evening’s fifth race. Ouzts was also elected by Team USA to carry the US flag during the opening ceremonies.

This is the second win for Team USA in the World Jockey Challenge. They earned the victory in the inaugural event during the 2014 racing season at Indiana Grand.