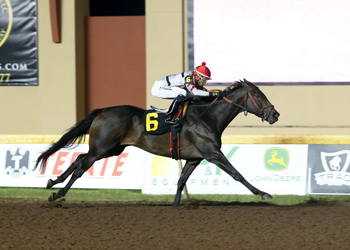 Owner Danny Caldwell of Poteau, Okla. has been in an early-season battle with many other owners at the top of the Remington Park standings. Thursday night may have been the provided the opportunity for his operation to break away from the others as he won three of the four races where he had horses involved.

Given To Fashion ($10.20 to win) in race five, followed by Baggatricks ($5.60) in race seven and Gilded Bling ($5.80) in race nine, gave Caldwell his hat trick for the night. The triple also made him the first owner to reach 20 wins on the season.

Caldwell is seeking his seventh leading owner title at Remington Park and his sixth in a row. End Zone Athletics of Mansfield, Texas is second in the owner standings with 16 wins. Toby Keith’s Dream Walkin’ Farms of Norman, Okla. is third with 12 wins while Clark Brewster of Tulsa, Okla. is fourth in the standing with 11 wins.

Vazquez also rode Dr. Anderson ($15.40) to victory in race two, giving him a riding quadruple on the evening. He now has 38 wins for the season, good for second place in the jockey standings as he sits two wins behind C.J. McMahon who has 40 victories.