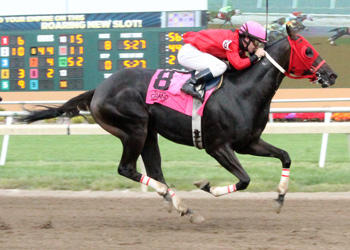 For the first time in the 13-year history of Thoroughbred racing at Indiana Grand, six stakes will be grouped together to form the inaugural Indiana Sprint Championships set for Wednesday, Sept. 30 at Indiana Grand Racing & Casino. The stakes races, all with purses of $85,000 for Indiana-breds, will run successively from races four through nine on the 10-race program that begins at 2:05 p.m. EST. The event was created by Director of Racing Kevin Greely to help enhance the Indiana stakes program at Indiana Grand.

Heading the list of stakes on the card is the 19th running of the $85,000 Brickyard Stakes in race nine. The race was first created in 1997 at Hoosier Park and moved to its new home at Indiana Grand in 2013 when all Thoroughbred and Quarter Horse racing was moved to one track in Indiana.

Heading the list of contenders for the Brickyard title are two newcomers to stakes action who have both won three of their last four starts as they step into their first stakes race. I Like Beer from the Ron Brown Stable has three wins and two seconds in eight starts for 2015 and will look to increase his bankroll to more than $200,000 with a win in a the Brickyard. The Pass Rush five-year-old gelding was an easy winner in his last two starts, besting four other starters in the race in his last outing. I Like Beer has drawn post five with Orlando Mojica aboard.

Also looking to win his third straight start is Changingtide from the Dawn Fontenot Stable. The three-year-old son of Lightnin N Thunder has three wins in seven starts this season for Fontenot, who also owns. Samuel Bermudez will ride from post one in the 12-horse lineup.

Aft is a third horse in the field looking to extend his win streak to three. Trained by Mike Lauer and owned by his wife, Penny, Aft has stakes experience, with his best stakes appearance recorded in last year’s $150,000 Governor’s Stakes at Indiana Grand, finishing fourth. The four-year-old homebred son of Mizzen Mast will be guided by Rafael Hernandez for the first time.

The field also includes last year’s winner, Sucess is Racing, who starts from post four with Fernando De La Cruz aboard. The five-year-old Major Success gelding is trained by Kim Hammond and finished second in his last start out to I Like Beer. He won the Brickyard last year in a time of 1:10.10 for the six-furlong stakes race. The stakes record was set in 1998 by Swift Appraisal and Jon Court in a time of 1:09.08.

The Brickyard Stakes will be preceded by the 21st running of the $85,000-added Merrillville Stakes for three-year-old fillies and older. The Merrillville is only one of three stakes races from the inaugural season of pari-mutuel racing in the state of Indiana still in existence. It joins the Grade II Indiana Derby and the Grade II Indiana Oaks as stakes created in 1995.

The stakes record for the Merrillville Stakes was established in 1996 by To Much Coffee and Jon Court in a time of 1:08.40. To Much Coffee is always fondly remembered as the horse missing an “o” from its name and was later honored with a stakes race. The To Much Coffee Stakes will move into its 18th running on closing night as part of Indiana Champions Saturday, Oct. 31, 2015, also a new event created by Greely in 2015.