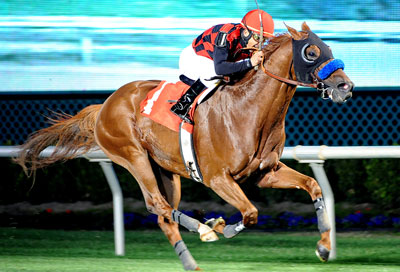 Trainer John Terranova had never run a horse at Sam Houston Race Park, but when looking at options for Swift Warrior, the Grade 3, $200,000 Connally Turf Cup had considerable appeal. He knew his horse liked going a mile-and-one-eighth on the turf, and the timing of the Connally fit well.

What he and his New Jersey-based owners, James Covello and James Dolan, did not anticipate is the ease in which their Kentucky-bred would win the Grade 3 turf contest. With Jose Espinoza in the irons, the First Samurai 5-year-old never relinquished the lead, completing the first quarter-mile in :24.98 and finishing 2 ¾ lengths ahead of his nine rivals. The final time, over a firm turf course, was 1:49.21.

This was just the third time in the previous 17 editions of the Connally Turf Cup that a front-runner emerged victorious. Warleigh in 2004 and Mending Fences in 2007 were the only two turf specialists to win in gate-to-wire fashion.

“I thought he might end up on the lead,” said Terranova from his south Florida base. “On paper, it didn’t look like there would be a strong pace to run at. This horse is very versatile and Jose knows him well. He looked very comfortable out there tonight.”

Terranova gave high marks to Sam Houston Race Park. He had shipped Swift Warrior in on Tuesday and felt the horse adjusted well to his surroundings, and obviously took beautifully to the Connally Turf Course.

This was the first time Espinoza had ridden in Houston, and he had an enjoyable experience.

“Everyone made me feel at home,” said Espinoza. “The people were so nice.”

Rosie Napravnik, who piloted Papaw Bodie to victory in the 2012 Connally Turf Cup for trainer Mike Maker, had a solid runner-up finish aboard King David, owned by Scarlet Stable.

“He ran well,” Napravnik said of the 4-year-old son of Hat Trick.

Swift Warrior ($5.80) received a check for $114,000, increasing his career bankroll to $340,843. Terranova indicated that the Grade 1 Woodford Reserve at Churchill Downs was under consideration for the next start for Swift Warrior.