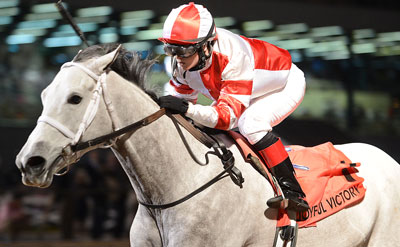 The inaugural running of the $400,000 Houston Ladies Classic, at a distance of a mile and one-sixteenth, attracted a spectacular field of fillies and mares. From an Oklahoma champion to a filly that competed in the Grade 1 Kentucky Oaks, the contenders arrived with collective earnings in excess of $2.3 million.

However, there was no denying the class and determination of Joyful Victory, who took the lead under rider Rosie Napravnik and drew off to a 4 ¼-length score.

“It wasn’t necessarily my goal to go to the lead,” said Napravnik. “I expected to sit off the pace a little. But, when no one came with us, I said ‘we’ll take it’. She was on her game today and ran an excellent race.”

Trainer Larry Jones had high hopes for Joyful Victory, an Ontario-bred daughter of Tapit owned by Fox Hill Farms Inc. She won the Grade 3 Honeybee and Grade 2 Fantasy Stakes at Oaklawn Park before running fourth in the 2011 Kentucky Oaks. Her 4-year-old campaign was highly respectable with second and third-place finishes in five graded stakes. Her last win was in February 2012, and Jones was thrilled with her riveting performance on Saturday evening.

“The plan was to get her to relax; not to fight her and just let her run,” said Jones. “I can’t take credit for setting two track records; Rosie had everything to do with that. But if there was one I really wanted, it was this race.”

Brushed by a Star ran a game second for trainer Eddie Kenneally. The well-traveled mare racked up four wins in 2012, with stakes wins in the Grade 2 Molly Pitcher at Monmouth Park and the Chilukki Stakes last November at Churchill Downs. Regular pilot Corey Lanerie, who was the leading rider at Sam Houston Race Park in 1995 and 1996, finished 1 ¾ lengths ahead of Sisterly Love, who was making her stakes debut for conditioner Mark Casse.

She’s All In was next for trainer Donnie K. Von Hemel, followed by Lookinforchange and Summer Applause.

Rider Miguel Mena lost his irons aboard Summer Applause, who was making her first start since running in the Kentucky Oaks last May at Churchill Downs.

Joyful Victory paid $5.00 for the win and earned $237,600 for the Houston Ladies Classic victory.

Jones and Napravnik also teamed up to set another track record in the $75,000 Champion Energy Services Stakes with Ikon Ike. The 4-year-old son of Yes It’s True edged 2010 Breeders’ Cup Turf Sprint (G1) winner Chamberlain Bridge in a tight photo in a final time of :56.48 seconds, besting the previous record of :56.81 set by Charming Socialite in 2006 for five furlongs on the turf.