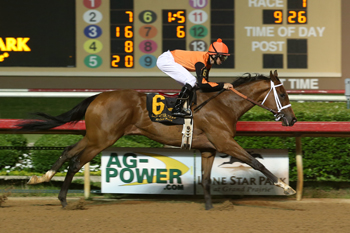 There is no denying that Brad Grady’s super fast gelding Supermason likes racing at Lone Star Park, and he proved that again on opening night on Thursday. The 4-year-old son of Grasshopper, out of the Midway Road mare Folksy, just cinched his third win over the Lone Star dirt surface from six total starts here. The victory marked his fifth overall from 16 career starts.

Imma Bling went right for the lead, setting the pace with Supermason and jockey Lindey Wade sitting just behind, going along comfortably as if they knew the precise moment the leader would give way and the race would be theirs for the taking.

“When we broke out of the gates I was a little worried because he stumbled the first jump, but it helped me, because the one horse [Imma Bling] got away and I thought he would come back to me,” said Wade. “I just swallowed him up and it was easy from there.”

The six and one half furlong contest over a fast race track was over in 1:16.68. Posting fractions of 22.78 and 45.50, it was 7 ¾ lengths back to Spider’s Alibi, who was up for second place while favorite A M Milky Way was able to hold on for third another 1 ½ lengths behind the top two.

Supermason increased his career earnings account to $181,355 with the addition of $30,000 from tonight’s victory.

“Bret and Jay have done a great job with this horse,” said owner Brad Grady. “He was slow maturing, but it looks like his 4-year-old-year just may be the one.”