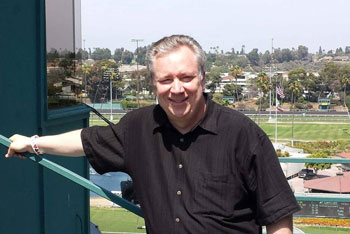 “I couldn’t be happier to be back in racing,” Byers said. “I’ve always thought very highly of Lone Star Park and the Metroplex and can’t wait to get started.”

Byers brings 33 years of sportscasting experience to the position, with 15 as a track announcer. A graduate of San Diego State University, Byers began his career in 1983 in the publicity department at Caliente Race Track in Tijuana, Mexico. Later that year, he joined the Los Angeles circuit as backup announcer at Del Mar and Santa Anita before being named Hollywood Park’s track announcer in 1984.

After four years at Hollywood Park, Byers became the first voice of Remington Park in 1988 and served 11 years as Thoroughbred and Quarter Horse announcer for the Oklahoma City track until embarking on a 16-year run as a radio play-by-play broadcaster in 1999. Byers spent 11 seasons in baseball with the Oklahoma City RedHawks, then the top affiliate of the Texas Rangers, in the Pacific Coast League. He later switched sports, handling broadcasts for the American Hockey League’s Oklahoma City Barons from 2010-2015, when the team ceased operations.

In recent years Byers has returned to racing as a substitute announcer at various tracks in the region, including a 13-night stint at Lone Star Park in 2015.

“To be able to fill-in here last year was a valuable chance to get broken in and meet people and I really appreciate this opportunity,” added Byers.

During his career he has also hosted a variety of horse racing telecasts and replay shows, including a pair of current web TV series covering Quarter Horse racing.

“I’ve been to every track in the country and I truly believe Jim is one of the premier race callers in the industry,” said Scott Wells, Lone Star Park’s President and General Manager. “His knowledge and accuracy are unsurpassed.”

Recalling a race Byers called during the inaugural season at Remington Park, horses Pop Pop B.B. Gun and Run Run Runaway went head-to-head in a tongue twisting, edge of your seat duel the entire length of the stretch… “His call was flawless,” Wells said.

Lies, Lone Star Park’s announcer from 2005-15, left the Grand Prairie track to accept the position of Racing Secretary for both Cherokee Casino’s Will Rogers Downs in Claremore and at Fair Meadows in Tulsa. He is also the announcer at both Oklahoma tracks as well as for Kentucky Downs in Franklin, KY.