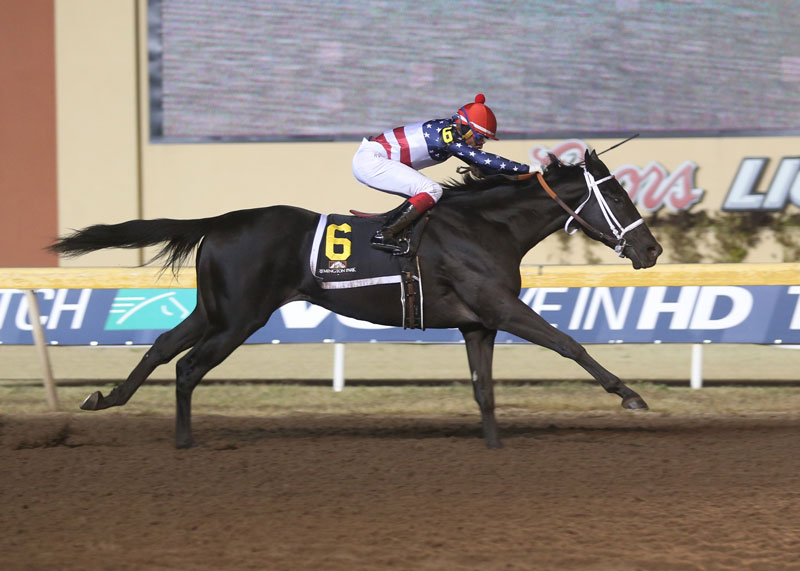 Greyvitos, winner of the Grade 3, $100,000 Bob Hope Stakes at Del Mar in southern California on Nov. 11, drew the number-twelve post position and will be on the outside when retiring starter Ed Crane sends the dozen on their way. National Racing Hall of Fame Jockey Victor Espinoza will be in for the mount.

Espinoza is best known as the jockey for Triple Crown winner American Pharoah in 2015 as well as riding other stars such as 2015 Horse of the Year California Chrome and 2002 Kentucky Derby winner War Emblem. Espinoza has won 3,340 career races with total mount earnings of more than $195 million. Greyvitos will be his first mount ever at Remington Park.

Trained by Adam Kitchingman, Greyvitos is owned by Triple B Farms. Greyvitos broke his maiden status in the Bob Hope Stakes. This will be the third time in four starts that Espinoza has ridden the Virginia-bred colt by Malibu Moon. Greyvitos has been tabbed the morning-line favorite by Remington Park line-maker Rick Lee.

Redatory, the undefeated winner of the $100,000 Clever Trevor Stakes at Remington Park on Nov. 3, drew post-position nine. Owned by James Wessel of Bulverde, Texas and trained by Allen Dupuy, jockey David Cabrera has his normal mount on Redatory. The Texas-bred gelding by Oratory broke his maiden on Oct. 7 by two lengths in a six-furlong race. His Clever Trevor winning margin was by 2-1/4 lengths while handling seven furlongs.

Trainer Doug O’Neill and jockey Mario Gutierrez have teamed to win a pair of Kentucky Derbies with I’ll Have Another (2012) and Nyquist (2016). They will team to try and win their first Springboard Mile with Flip The Coin Jan. A Kentucky-bred colt by Trappe Shot, Flip The Coin Jan broke his maiden status in his last start, on Nov. 12 at Del Mar, in a $65,000-level maiden-claiming race at one mile. O’Neill claimed Flip The Coin Jan at Del Mar for $50,000 on Aug. 17, for his current ownership group of ERJ Racing, Purple Rein Racing, Westside Racing and Steve Rothblum.

Night Strike comes into the Springboard Mile off his win in the $75,000, Don McNeill Stakes at Remington Park for Oklahoma-breds on Nov. 25. The colt rallied from mid-pack to gain the lead late in the stretch and draw away to a three-length score. Owned by Erich Brehm of Sunnyvale, Texas, Night Strike is trained by Bret Calhoun and will be ridden in the Springboard for the first time by Iram Diego.

The field for Sunday’s Springboard Mile, by program and post-position order, with trainer, jockey: