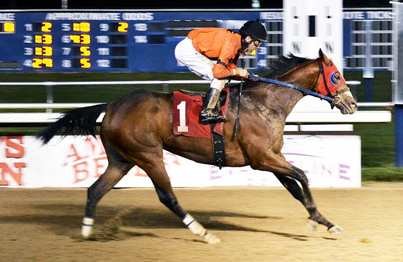 Evangeline Downs on July 27 presented the historic D.S. “Shine” Young Memorial Futurity for Louisiana-breds in two divisions with Solid Sender taking the fillies race to become the first stakes-winning graduate of the Equine Sales Company yearling auction and Le Gris upsetting the colts and geldings division at odds of 16-1.

Solid Sender, a daughter of Texas stallion Early Flyer running for owner Scott and Company, closed with a rush to win her trial race at first asking and then took the $128,425 stakes in similar fashion as she launched a six-wide move before drawing away by 2 ¼ lengths. She was timed in 1:04.15 for 5 ½ furlongs with Gerard Melancon aboard for trainer Samuel Breaux.

Bred by Tom Curtis and Wayne Simpson out of the Texas-bred Spend a Buck mare Miss Ritz, whose five career stakes wins included the 2001 Friendship Stakes at Louisiana Downs, Solid Sender has now banked $86,055 in her two-race career. The filly sold at the Equine Sales Company’s inaugural yearling sale last year for $10,500 and then was bought back at the John Franks Memorial 2-year-olds in training sale earlier this year. She added to what has already been a remarkable year for Valor Farm stallion Early Flyer, who through early August has five juvenile winners from as many starters with four of those being stakes horses. Those five starters have combined to earn nearly $210,000 this year to rank Early Flyer among the top 15 juvenile sires nationally, despite having far fewer 2-year-olds than those ranked above him.

Whata Friend, a filly by My Friend Max running for Gene Patin and I. Lee Lange who sold for $12,000 at the Fasig-Tipton Texas yearling sale, set the early fractions and held on for second while going over the $50,000 mark in earnings. Terrell Jarrett Jr.’s Lady National, another graduate of the Equine Sales Company auction and a daughter of Notional, closed to take third.

In the division for males, Coteau Grove Farms LLC’s Le Gris, a 16-1 longshot breaking from post 12 in a full field of Louisiana-breds, scored by 2 ¼ lengths with Richard Eramia up for trainer Patrick Devereux Jr. The gray or roan gelding by Louisiana stallion Half Ours picked up his second career victory and nearly reached the $100,000 mark in earnings while taking the winner’s share of the $125,000 pot. HHZ Equine Arrowhead Farm LLC bred Le Gris out of the El Corredor mare La Flamenco.

Le Gris, who covered the distance in 1:04.04, became the fourth stakes winner for young stallion Half Ours, a son of Unbridled’s Song who stands at Clear Creek Stud in Folsom, Louisiana. Half Our also flashed talent as a juvenile by breaking his maiden at Keeneland by nearly 11 lengths and then taking the Three Chimneys Juvenile. He later won the Grade 2 Richter Scale Sprint Championship.

The “Shine,” formerly run as both the Cajun Futurity and the Southwest Futurity, has been held every year during the 48-year history of racing at Evangeline Downs. Since its inception, the race has anchored the 2-year-old stakes program in South-Central Louisiana and has featured some powerhouse performances, starting with the inaugural running back in 1966 when Tellike stormed home to win the then named Cajun Futurity. In 1978, the race was known as the Southwest Futurity and in that year’s renewal A Toast to Junius romped home under jockey Randy Romero to run his unbeaten streak to four. Trained by Junius Delahoussaye, A Toast to Junius would go on to win the first eight races of his career and 11 of 16 overall before entering the breeding shed. In 1999, Hallowed Dreams, who earned national acclaim while winning the first 16 races of her career, had her coming out party on a humid July evening as the Lloyd Romero trained filly won the “Shine” by eight lengths and set a track record while completely dominating her rivals under jockey Sylvester Carmouche Jr. The daughter of Malagra would go on to win 25 times from just 30 starts while finishing worse than third just one time during her four-year career.