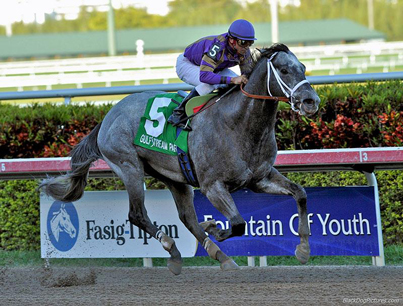 Spendthrift Farm has purchased Flashpoint, winner of the Hutcheson Stakes (G2) at Gulfstream Park and Jersey Shore Stakes (G3) at Monmouth Park. The multiple graded stakes-winning son of Pomeroy will take up stud duty at Le Mesa Stallions in Carencro, Louisiana, for the 2014 breeding season.

“Spendthrift is thrilled to bring Share The Upside to Louisiana breeders for the first time with this promising young stallion prospect. We remain committed to offering breeders exciting young stallion prospects in our Share The Upside program. And bringing this program to Louisiana allows us to continue our commitment to bringing breeders the best deals in the stallion business,” said Ned Toffey, Spendthrift Farm general manager.

“I think he’s an exceptional addition to the Louisiana program,” said Brett Brinkman of Le Mesa Stallions. “For the land of the futurities, his fast and precocious form is a great fit for our breeders.”

Flashpoint began his racing career at Aqueduct where he broke his maiden first time out by 6 1/4 lengths in six furlong maiden special weight on the inner track. He followed up that impressive performance with a dominating 7 ¼-length victory in the Hutcheson S. at Gulfstream Park in only his second race. He then defeated G1 winner Stay Thirsty and multiple-graded stakes winner Soldat in the Florida Derby (G1) finishing a game fourth.

Later that year, Flashpoint produced another dominating performance with a 7 length victory in the Jersey Shore S. (G3) at Monmouth Park for trainer Wesley Ward and owner Peachtree Stables. He finished his career with trainer Steve Asmussen who guided the talented sprinter to a victory in the Sam Houston Sprint Cup S. with a 99 Beyer and career earnings of $361,722.

The best racing son of multiple G1 stakes winner Pomeroy and out of speedy multiple stakes winner Two Punch Lil, Flashpoint has the kind of pedigree breeders are looking for including direct lines to Secretariat, Mr. Prospector and Raise a Native.

“Flashpoint was one of the best American 3-year-old sprinters of the last decade,” said Ken Wilkins, Spendthrift’s stallion director. “His race record is filled with several dominating wins and finished on the board in 12 of his 15 starts. But more than anything, we are excited to bring Louisiana breeders the Share The Upside program for the first time. We look forward to Flashpoint bringing the same kind of results that Into Mischief did for breeders who got involved in our first Share The Upside program.”