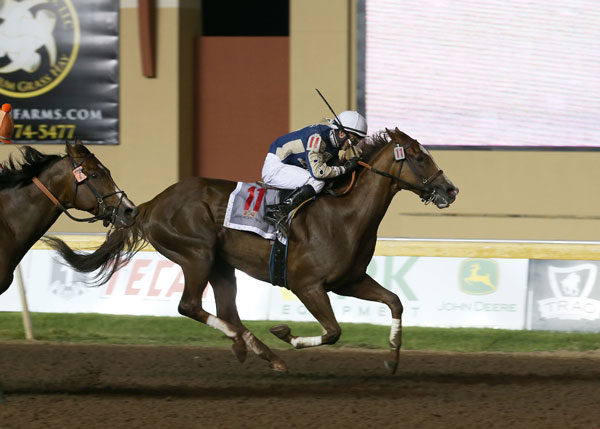 The $175,000 Governor’s Cup on Sunday at Remington Park will feature many of the top older horses in the region, including Smack Smack. He will try to become the first repeat winner of the race since in 16 years.

Owned by Toby Keith’s Dream Walkin Farm of Norman, Okla. and trained by Don Von Hemel, Smack Smack will try to become the first horse to win the Governor’s Cup in back-to-back seasons since the Oklahoma-bred millionaire Mr Ross managed the feat in 1999 and 2000.

A 5-year-old gelding by Closing Argument, Smack Smack is nearing millionaire status thanks to consecutive wins in the Grade 3, $300,000 Cornhusker Handicap at Prairie Meadows in Iowa in July and then the $175,000 Downs at Albuquerque Handicap in August.

Jockey Shane Laviolette will have his regular mount on Smack Smack, the morning-line favorite for the Governor’s Cup at 8-5 odds. Smack Smack has never been worse than third at Remington Park in four career starts here. He won the $100,000 Clever Trevor Stakes as a 2-year-old in 2013 for his other local score.

Mobile Bay, third in the 2015 Oklahoma Derby behind Shotgun Kowboy, will make his first return trip to Remington Park for the Governor’s Cup. Owned by Tigertail Ranch of Las Vegas and trained by Victor Arceneaux, Mobile Bay will be ridden by Hall of Fame jockey Edgar Prado and is the second-choice in the morning-line at 5-2 odds.

Code West won the Governor’s Cup in 2014 for Shawnee, Okla. owners Bryan, Leo and Tim Hawk. Trained by Boyd Caster, he was denied a repeat win last year by Smack Smack, settling for third-place. Code West will be ridden Sunday by Israel Ocampo and is at 4-1 odds in the morning-line.

The complete field for the Governor’s Cup, by post position and program number, with trainer, jockey and morning-line odds:

The Governor’s Cup will begin the Oklahoma Derby Day Primetime Pick 4 on Sunday. The 50-cent minimum bet will offer a guaranteed wagering pool of $50,000.

The schedule of races on Oklahoma Derby Day, and their post times (all Central):