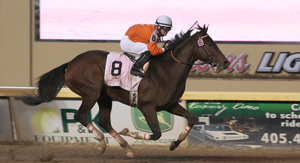 Texas Bling, a multiple stakes-winning earner of more than $400,000, has been retired from racing and will stand the 2017 breeding season at ESMS On the Brazos Equine Reproduction Center in Weatherford, Texas. He will stand for a private fee with special considerations for approved mares as property of his breeder Lewis Hall Jr. in the name of Hall’s Family Trust.

Trained throughout his career by Danele Durham, Texas Bling is a son of leading Texas sire Too Much Bling. He retires with six victories and a bankroll of $406,072.

The Texas-bred scored the biggest win of his career in the $300,000 Remington Springboard Mile Stakes in 2012. Despite having only a maiden victory on the turf to his credit at the time, Texas Bling upset one of the year’s best fields of 2-year-olds. Among the horses he defeated was Will Take Charge, who went on to win the Grade 1 Travers Stakes and finish second in the Grade 1 Breeders’ Cup Classic to earn Eclipse Award honors as top 3-year-old colt.

Texas Bling is out of the Country Pine mare Anythingmore, who produced another stakes winner by Too Much Bling for Durham and Hall in Everything Bling. That 4-year-old filly won the Yellow Rose Stakes earlier this year at Sam Houston and has banked $131,601 with a record of 14-4-1-3. Texas Bling will become the first son of Too Much Bling to retire to stud, and he is the second-leading earner for his sire behind only $431,913-earner Sam Sparkle.

“We are very excited about him being retired sound at a good point in his career, and Texas is definitely in need of a good young stallion,” said Durham. “Mr. Hall is a big supporter of Texas racing and plans to support Texas Bling with many of his top mares. We are pleased to offer special considerations to producing and winning mares to make sure he receives a high quality book to launch his stallion career.”