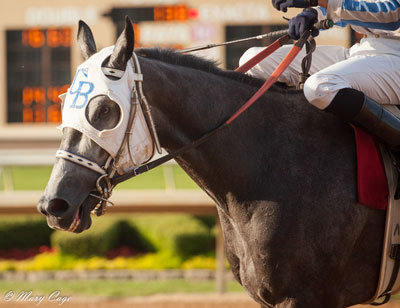 Slew’s Song has been named the 2016 Texas Champion Claimer after an online poll on the Texas Thoroughbred Association’s website. The mare will be honored along with the other previously announced Texas champions during the TTA’s annual awards banquet at Lone Star Park on June 24.

The Texas Champion Claimer award was created by the TTA to honor the hard-working horses who rarely receive recognition but who fill the majority of race cards every day. To be eligible to be included in the online poll, a Texas-bred had to win at least three claiming races in Texas and have earned at least $30,000 total for the year. Any race in which a horse was not entered for a claiming price, such as an allowance/optional claiming race, was not counted toward the minimum three wins in Texas.

A now 6-year-old mare by Valor Farm stallion My Golden Song, Slew’s Song won seven of 15 starts with three seconds and a third and $67,110 in earnings last year. All seven of her wins came in Texas. Slew’s Song ran for Bryan Henderson for most of the year, and then for Team Bryant Thoroughbreds. She was trained throughout the year by George Bryant. She was bred by Pat Sheetz out of the Classic Alliance mare Classic Mirage.