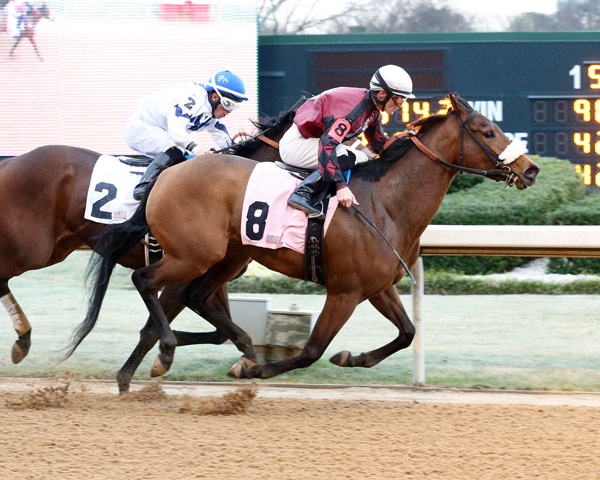 Jockey Alex Birzer became the 174th jockey in North America to win 3,000 races when he guided Numancia to victory in Sunday’s sixth race at Oaklawn. Birzer, 43, rode three winners on Saturday’s card to move within one win of the milestone, which came with fifth mount of the day.

“I’m speechless,” Birzer said. “My agent (Brian Assmann), and to all my people that ride me, I just thank you.”

“This is wonderful. It looked like it might set up this way last fall and I had it in my mind that it would be great to reach this here. I just love Oaklawn. I love the people here. The patrons are just unreal with the way they treat us. It’s a great racing atmosphere.”

Alex Birzer Bio:
· Jockey Alex Birzer, among Oaklawn’s leading riders, reached the 3,000-win milestone at the Hot Springs track Feb. 26 aboard Numancia. The 3-year-old filly was his 17th win of the meet to date and ranked him among the top five riders this season.
· Highlighting Birzer’s 2017 Oaklawn season thus far have been victories aboard Chanel’s Legacy in the $125,000 Dixie Belle and $125,000 Martha Washington Stakes for longtime client Lynn Chleborad.
· Other top mounts in recent years have been Private Prospect, American Sugar, Seriously Silver and Zealous Vision.
· A son of the nation’s heartland, Birzer is a veteran jockey who has spring-boarded successful Oaklawn meets into dominating performances at other tracks. He has led the standings four times at The Woodlands outside Kansas City, Kan. and holds three titles at Prairie Meadows where he hit the 2,000-win milestone June 4, 2010.
· One of Birzer’s top horses was Patton’s Victory who gave him his first career graded stakes tally in the 2003 Fifth Season at Oaklawn. He teamed with that horse to win the $75,000 Prairie Meadows Handicap and $50,000 Precisionist, as well.
· On Aug. 15, 1997, Birzer won six of his eight races at Columbus in Nebraska. The riding feat came the day after his daughter Jordan LeAnn was born.