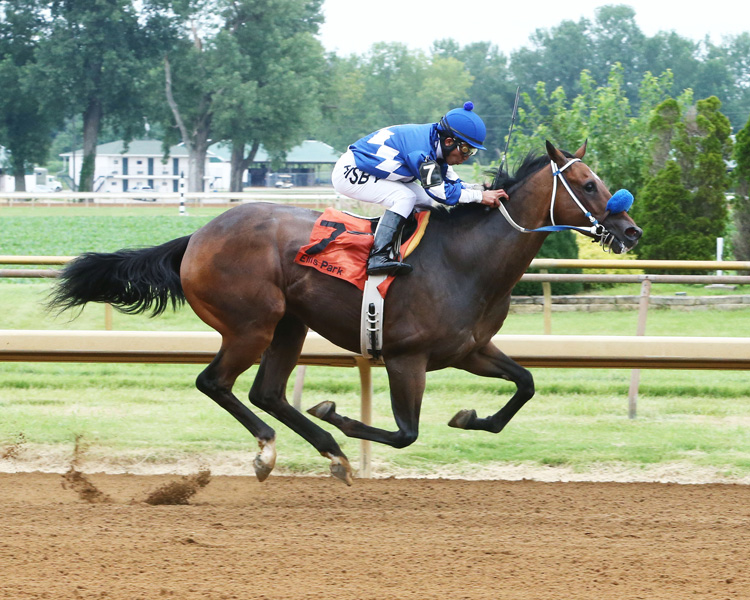 Ain’t In No Hurry certainly proved appropriately named when it came to getting to the races. But the 7-year-old gelding wasted no time getting to the winner’s circle, leading most of the way in his first start ever to take Ellis Park’s second race Friday by three lengths over favored Red Blue and True in the field of $16,000 maiden-claimers.

“He just got put on the back shelf for a while,” said owner-trainer Kody Boyd as he walked Ain’t In No Hurry toward the backstretch. “I had him in training as a 2-year-old, he just wasn’t mature yet. Same thing as a 3-year-old. Finally got him going as a 4-year-old, going good, and I went to work running the barn for Tevis McCauley, and he just didn’t have any space for him. So we turned him out in the field. I quit running the barn for him last year and pulled him out of the field and thought we’d give him a shot before he got too old.”

Co-bred by Will Farish of industry stalwart Lane’s End Farm, Ain’t In No Hurry has the pedigree to be a good horse. His full brother is multiple graded-stakes winner Easyfromthegitgo, winner of the Iowa Derby and second in the Louisiana, Indiana and Oklahoma derbys.

Ain’t In No Hurry is a son of 2-year-old champion Dehere and out of the Easy Goer mare Montera, whose Grade 3-winning daughter Sue’s Good News produced Grade 1-winner and millionaire Tiz Miz Sue. Montera also is the dam of Grade 2-placed Conquest Curlgirl, who was third in last week’s Mari Hulman George Stakes at Indiana Grand.

“Lane’s End had him in the yearling sale,” Boyd said. “That back leg there, you can see the scar tissue on it, he stuck it through a fence a few weeks from the sale. They gave him to a buddy of mine to ‘pinhook’ (resell) as a 2-year-old. He ended up going back to Florida and left him with me.”

Ain’t In No Hurry had decent works at The Thoroughbred Center off Paris Pike in Lexington, including five-eighths of a mile out of the gate in 1:02 3/5 on July 16.

“I’ve liked him all along,” Boyd said. “I thought about running him maiden special weight. Just one of those things, he got on the back shelf. I knew he could win if he’d just come out of the gate. Last time he had trouble in the gate May 14 at Churchill. He flipped over in the gate and was scratched. He cut himself up, but never went lame or anything.”

In Kentucky, horses that haven’t won a race by the time they turn 6 years old get five attempts to win. If they don’t, they must leave the state and win a race before they can return to competition in the commonwealth. Boyd didn’t have to worry about that.

Ridden by Ronald Hisby, Ain’t In No Hurry was bothered at the start when the horse inside him broke outward. But Ain’t In No Hurry soon thereafter took a lead he never relinquished, covering six furlongs in a decent 1:10 4/5.

“He finally got his chance,” Boyd said.