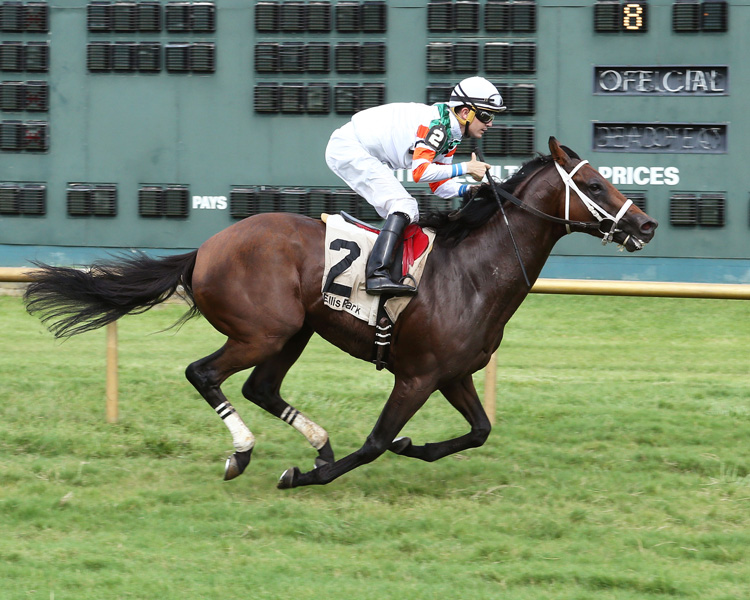 Blame Angel previously ran on Father’s Day at Churchill Downs, winning at 17-1 odds in what proved the last horse to run with Tom R. McCarthy as trainer. McCarthy died Thursday morning at age 82 in Louisville after battling stage 4 melanoma. Blame Angel a day later in the $20,000 claiming race became the first horse to run with his son, Tom S., as the trainer of record, though he long had been involved with his dad’s horses. Tim McCarthy, also Tom R.’s son, is co-owner of the 4-year-old Blame Angel with Gilbert Nutt of Louisville.

“When I pulled off I-64 onto I-69” outside of Evansville, “I looked up and I said, ‘Help us out today. Give us some help because I know you’ll push us,’” Tom S. said. “And he did. So we won on Father’s Day. He was watching, wasn’t at the track because he was very, very ill. And we won today. So all is good.”

Tom R. McCarthy was the feel-good story heading into the 2009 Kentucky Derby. He was was a retired biology teacher and high-school principal who long had trained and owned a horse or two on the side. He had no horses when he claimed General Quarters for $20,000 the first time the gray colt ran.

McCarthy’s one-horse stable burst onto the Kentucky Derby scene with the gray General Quarters taking Keeneland’s Grade I Toyota Blue Grass. Though he did not run well in the Derby – finishing 10th with a tough trip – he returned to the next Derby Day to win the Grade I Woodford Reserve Turf Classic in his grass debut.

Tom R. had four horses in training at Churchill Downs’ Trackside training center, their care overseen by Tom S. and retired engineer Jerry Hills, Tom R.’s former student and now owner. There also are 2-year-olds sired by General Quarters in Lexington owned by family and friends and a yearling in Ocala, along with two mares in foal to General Quarters. And there’s a four-month-old colt by General Quarters that will be named Tom’s Little General.

Blame Angel was ridden at Ellis by Brian Hernandez Jr. After the winner’s circle presentation, jockeys Robby Albarado (who during one stretch road General Quarters as a 4-year-old) and Miguel Mena (who rode Blame Angel in his Churchill victory but was committed to another horse Friday) came up to offer their congratulations and condolences to the McCarthy brothers.

“It makes you want to cry,” said Hills, who began helping his former teacher at the barn before the 2009 Blue Grass and wound up being partners in horses with Tom S. “That was tough.”

On the racetrack, you deal with sorrow the same way you deal with joy: Go to work the next day. So the McCarthy boys never thought about scratching.