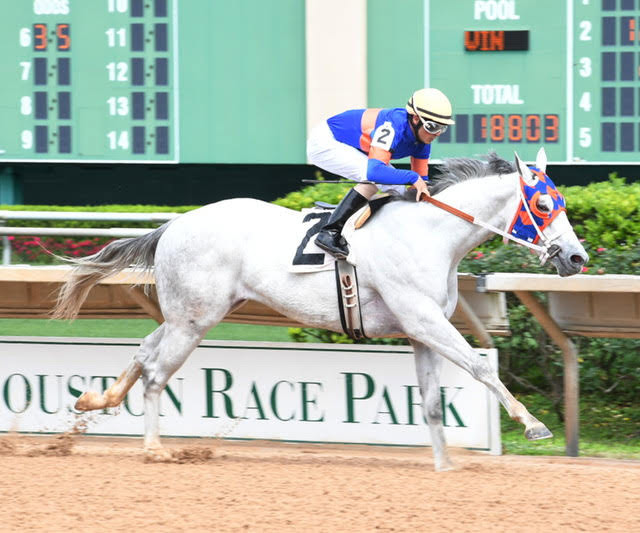 Rumpole, bred and owned by Joe Archer of Fletcher Properties Inc., returned to the winner’s circle in his second stakes win of the meet this afternoon. The son of Too Much Bling has made three starts, beginning with a fourth-place finish in a tough edition of the $50,000 Space City Stakes here on January 29. That race set him up nicely for his gate-to-wire score in the $65,000 Jim’s Orbit division of the Texas Stallion Stakes three weeks later.

Trainer Robert Young pointed him to the Groovy and gave a leg up to regular rider David Cabrera. He sent his charge to the lead, covering the first quarter in :22.97 and the half-mile in :46.70. He left the gate as the overwhelming 1-5 choice and withstood the challenge of Contrarytoordinary, crossing the wire in 1:11.35 over a fast main track.

“He’s getting better every time,” said Cabrera. “Today when they left him alone on the lead, he pricked his ears and just went on. He’s a pretty classy horse; the kind everybody wants to ride!”

Young was pleased with the maturing and strong effort from Rumpole.

“He’s doing good right now and he’ll have a little break before heading to Lone Star,” said Young. “David’s a great rider; he does his homework and there’s not much you’ve got to tell him.”

It was a solid runner-up effort for Contrarytoordinary, a Valid Expectations colt co-owned by Danny Pish and Denis Foster and trained by Pish. Ted Gondron was a closing second, but could not catch the winner. Another Too Much Bling Colt, Shaded ran third, followed by Imma Wild Bling, Too Much Gone and My Expectations.

The 4-year-old son of Early Flyer is trained by Bret Calhoun. Last year, Bravura was victorious in the $50,000 Groovy Stakes and followed that with an impressive score in the $75,000 Jim’s Orbit division of the Texas Stallion Stakes. Bravura underwent surgery to repair a small, non-displaced chip last year, and returned to action earlier this meet in the $50,000 Houston Sprint Cup, finishing second to Union Jackson. DeShawn Parker rode the chestnut colt on February 4, and reunited for a seemingly effortless performance today. He took the lead at the half-mile mark, and drew off by 2 ¾ lengths in a final time of 1:10.58.

“Bret told me that there might be some early speed, so to just sit and pounce turning for home,” said Parker. “But he kind of dragged me out of the turn, so I just let him do his thing. He was ready today!”

Parker had a huge Texas Champions Weekend, winning four stakes for Calhoun. He continues to be a fan of winter racing in Houston.

“I love it here,” said Parker. “The track is perfect; the people are beautiful and you can’t beat the weather!”

Ashford watched the race from home, and shared special news about the significance of March 13.

“It’s his official birthday, and mine today, so what a fabulous present,” said Ashford. “My beautiful boy looked so good today; I just hated not being there to see him win!”

Reflector closed for second under Iram Diego and Calhoun’s other entrant, Supermason, was third. Defending champion A M Milky Way completed the superfecta, followed by Valid Nick ,Meme Jo and Turn Up the Lights. Solar Charge was an early scratch.

Bravura paid $4.40 for the win, and Calhoun indicated that both Bravura and Supermason would run in the Premiere Stakes, on opening day at Lone Star Park.

Final Texas Champions Stakes on Tuesday
Texas Champions Weekend will conclude on Tuesday, March 14 with the final of seven features for accredited Texas-breds, the $50,000 Star of Texas Stakes. Tuesday’s card begins at noon and will also feature the presentation of the end of the meet awards for leading owner, trainer and jockey.