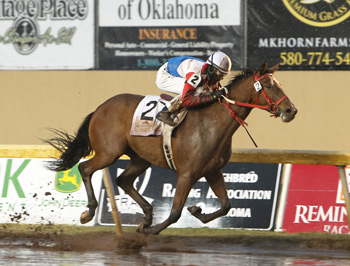 A Black Friday afternoon card at Remington Park featured temperatures at the freezing mark, consistent precipitation, a sloppy track and a pair of stakes races for Oklahoma-bred 2-year-olds. Royal Lion was dominant in the $75,000 Don McNeill Memorial Stakes while Go No Go won the $75,000 Slide Show Stakes.

$75,000 Don McNeill Memorial Stakes
The race named in honor of the owner/breeder of the great Clever Trevor and long-time supporter of Remington Park and Oklahoma-bred racing, went to Royal Lion who was powerful in pulling away from his rivals to win by 5-1/4 lengths. Owned by 7 Cedars Farm of Barnsdall, Okla. and trained by Clinton Stuart, Royal Lion cruised home under Deshawn Parker.

Royal Lion was reserved early in the one-mile event, lagging near the back of the field for the first half-mile. Parker roused his mount leaving the backstretch and the pair found a path along the rail to advance without hindrance. Royal Lion had the lead, going to the front of the 11-horse field just before the top of the stretch and then opened up while appearing to have plenty in reserve, crossing the finish in 1:40.80.

Mr. N was forwardly placed throughout the race but had no answer once Royal Lion took the lead, settling for second. Weknewuweretrouble set the pace and held on for third. He handled the opening quarter-mile in :23.44 seconds; a half-mile in :48.19 and then three-quarters of a mile in 1:14.66.

The win was the third from eight career starts for Royal Lion and his second at Remington Park. The gelding by Kitalpha from the Royal Academy mare Royal World made $45,000 for the first stakes victory of his career to run his overall total to $134,280. He was bred by John James Revocable Living Trust.

$75,000 Slide Show Stakes
The 2-year-old Oklahoma-bred fillies had their one-mile test in the inaugural Slide Show Stakes, named in honor of one of the top Oklahoma-bred fillies in Remington Park history. Go No Go rallied from mid-pack in the field of nine to win her first stakes race and her initial attempt around two turns, scoring by one length.

Owned by Forest Hills Farm of Guthrie, Okla. and trained by Bret Calhoun, Go No Go was ridden by C.J. McMahon. She took advantage of Hailstorm Slew floating off the final turn and very wide into the stretch, while she was able to stay inside and find the shorter path to the finish in 1:43.27.

Bred in Oklahoma by the owner, Go No Go made $45,000 to run her career total to $112,290. A daughter of Archarcharch from the Dance Master mare Oneinamilliongirl, Go No Go won her third career race from just four starts, all this season at Remington Park.