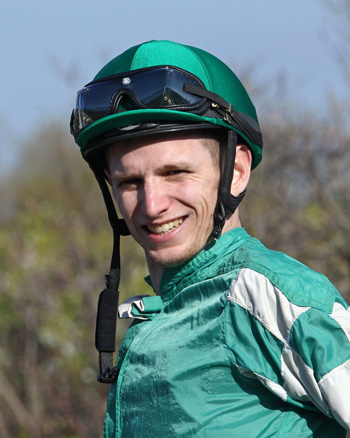 Jockey Jareth Loveberry, enjoying a successful second season at Remington Park, posted his 1,000th career victory when he won the second race of the night aboard Lawless West.

The win was not without some adventure as Loveberry guided Lawless West down the sloppy and sealed stretch. His colt came into contact with runner-up Shock ‘Em All and the Oklahoma Horse Racing Commission Stewards posted the inquiry immediately when the field crossed the finish line. Then the jockeys of the second and third-place finishers both filed an objection against Loveberry, claiming interference in the stretch. After a long review, the result was allowed to stand as the contact was deemed mutual between the top two finishers and Loveberry had his milestone score.

Lawless West is owned by Bryan and Tim Hawk of Shawnee, Okla. and trained by Boyd Caster. The colt by Giant’s Causeway from the Strodes Creek mare River Flower broke his maiden status at 1 mile-70 yards in 1:45.67. It was his 10th attempt to gain his initial victory.

Loveberry began his jockey career in 2005, racing primarily in Ohio, West Virginia and in Michigan. His best year for wins was 2012 when he won 200 races. Loveberry relocated to Remington Park in 2014 and currently is third in the jockey standings with 52 wins, behind only C.J. McMahon (79) and Ramon Vazquez (71).