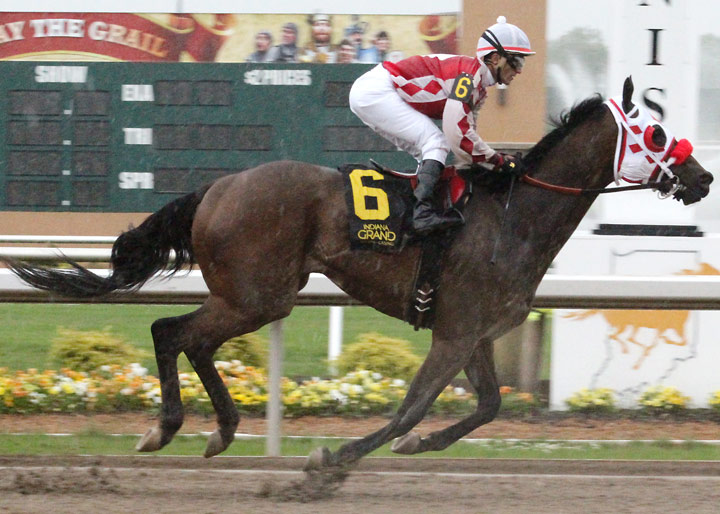 Ron was an impressive 2-year-old last season at Indiana Grand. He was tagged as the heavy favorite in the fourth running of the $100,000-added Sagamore Sired Stakes on Wednesday, May 24 and he didn’t disappoint, turning in a strong performance in the rain for the win.

Ridden by Leandro Goncalves, Ron started his journey in the six-furlong event from post six. Sung and Constantino Roman showed the best early speed from the gate as expected to lead the pack of horses vying for early positioning down the backstretch.

Evader and Marcelino Pedroza saved ground inside while Exceptional City and Eddie Perez tracked the leader on the outside. Ron followed along in the center of the pack before hitting his best stride halfway through the race and moving to the outside. Once he was free, he showed great strength in reaching the front and by the time the field had hit the stretch, he had opened up on his opponents by several lengths.

In the final strides, Ron coasted under the wire in a time of 1:11.34, a one and one-half length winner over Leo D and Alonso Quinonez, who made up ground on the outside to finish second. Calandave and Albin Jimenez showed a mild late run to finish third.

“This is the race I’ve been waiting for,” said Goncalves, who has been aboard Ron in his last two starts. “This horse has been training so well, and I want to thank Marvin (Johnson) for sticking with me. He told me before the race to ride him like he was my horse. I knew the seven (Sung) had speed, so I wanted him (Ron) to get settled first and just get clear. He’s a big horse so it takes him a few yards to get going.”

Owned and trained by Marvin Johnson, Ron is now three for seven in his career and has only missed the top three once. The son of Mondavi pushed his career earnings to nearly $200,000. Mondavi, a son of Maria’s Mon, stands at Breakway Farm in Dillsboro, Indiana.

“There was a little more pace in there than what I thought there would be,” said Johnson. “I thought he’d be a little closer to the lead out of the gate, but the jock did a great job riding him. He was a little short in his first race. In his last start, he had beaucoup problems in that race, but it set the horse up good for this race today.”