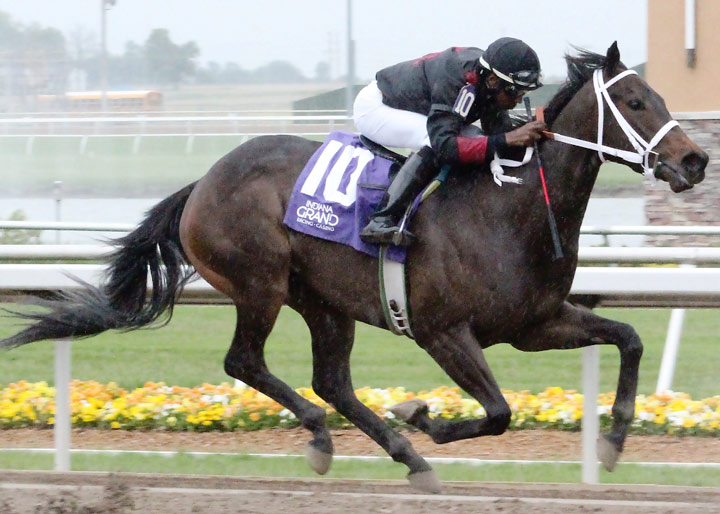 Starting from the outside post 10, Defining Hope was not much of a threat out of the starting gate as Handfuls Baby Girl and Alonso Quinonez grabbed the early lead inside with Benten and Marcelino Pedroza to her outside. Passion Rush and DeShawn Parker and Airtime Annie and Rodney Prescott also pressed the pace early on, spanning four wide across the track.

As the only turn of the six-furlong race neared, the leaders began to fan out and one horse was gaining ground and moving with authority on the outside in the turn. That horse was Defining Hope, who had secured the top spot by the top of the stretch. Franklin urged the daughter of Strong Hope to display a little more speed and she gave it without hesitation, opening up on the field by three and one-half lengths, eventually getting to a nine and one-half length advantage at the finish line for the win. Passion Rush maintained ground inside for second followed by No Bluff Just Hope and Edie Perez, who closed in nicely for third.

“She (Defining Hope) broke sharp and I just wanted her to settle and let everyone else get settled before moving,” said Franklin. “She rides off your fingertips. She’s definitely a push button horse and I want to thank Barb (McBride) and Miss Colette for letting me ride such a nice horse.”

It was the first win of the season for Defining Hope in her second start of the year. She now has four wins in seven career starts with purse earnings in excess of $225,000 for Vanmatre, a first time Thoroughbred owner.

“I thought this filly (Defining Hope) was special from the day she was born,” said Vanmatre. “She had a great look and stood regal for photos, just like her mom. I am thrilled with her win. We have a second one, a brother, coming up that is a two-year-old that will be racing soon.”

Vanmatre acquired Defining Hope’s dam, On the Point, after she was injured in a starting gate incident at two. She was bred when she was five and produced Vanmatre’s first racehorse, Defining Hope, who was raised at Dr. Roger Beam’s farm in Trafalgar, Ind. until she was transferred to Margaux Farm near Lexington, Ky. to begin the breaking process. Vanmatre connected with McBride when the filly was ready to head to the track and has been a shining star for her connections from day one.

“I had all faith in Malcolm for this race and I wasn’t concerned what he would do,” said McBride. “Our stable has had a slow start this year, but you have to learn to relax and don’t change anything. It will come around eventually.”