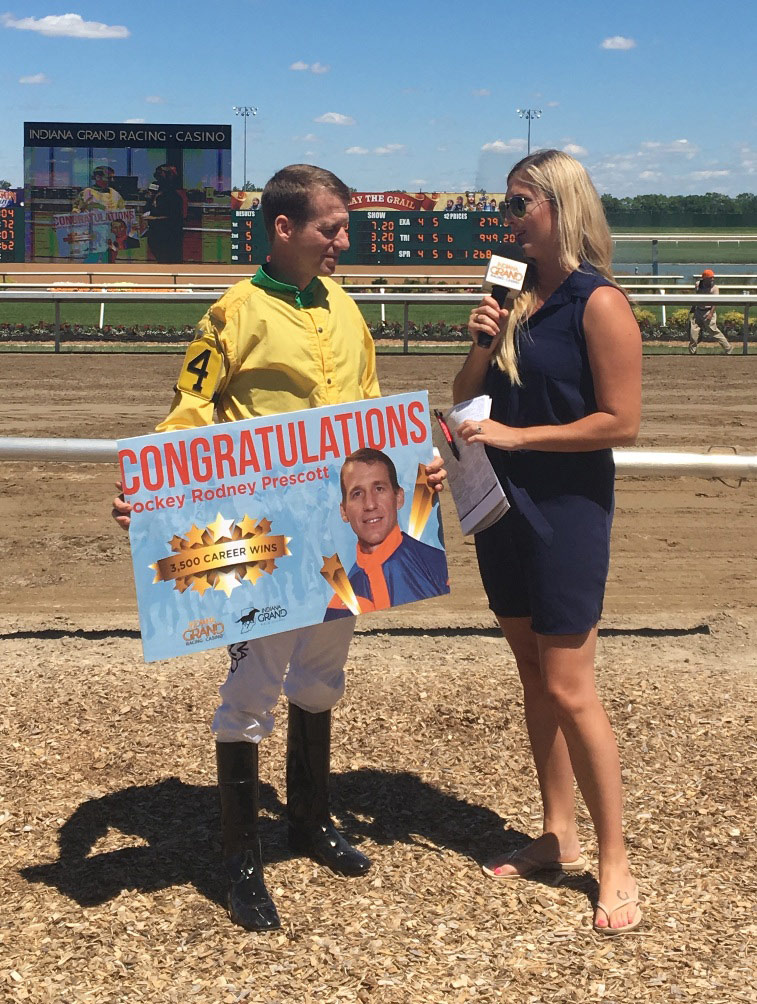 Rodney Prescott, Indiana’s all-time leading jockey, scored his 3,500th career victory at Indiana Grand Racing & Casino Friday, June 2. The win was one of two on the day for the Portland, Ind. native who earned the milestone win aboard Stand On It trained by Wayne Mogge in the fourth race. The win also marked his second riding double in two days at Indiana Grand.

“I won my 3,000th race at Turfway Park for the same trainer (Wayne Mogge),” said Prescott. “I wasn’t aware that it was my 3,500th win because I wasn’t counting down but I knew I was close. It takes the pressure away.”

Prescott has been riding horses since the summer of 1994. He was an apprentice the first year of pari-mutuel racing at Hoosier Park in 1995 and has competed on the Indiana circuit every year since that time. He scored his 2,000th career win at Hoosier Park in 2006 and the wins have continued to pile up. Prescott has numerous leading rider titles to his credit from River Downs, Turfway Park, Hoosier Park and Indiana Grand. In all, the multiple Graded Stakes placed jockey has 782 wins at Indiana Grand alone with more than $13.5 million in purse earnings.

“When I started off as a jockey, everyone told me I was going to be too big so I thought I would ride for a couple of years and then move on to training or breaking babies,” said Prescott. “But here I am 20-something years later and I’m still doing it.”

Prescott, a longtime director for the Jockey’s Guild and current secretary of the board for the 2017-2018 season, has maintained a top 10 spot in the standings each year at Indiana Grand. He is currently ranked third in 2017 and has kept a spot among the top 100 jockeys nationally for the past 17 years. In addition to his success in Thoroughbred racing, Prescott also rides Quarter Horses at the track and is also ranked third among all Quarter Horse jockeys at Indiana Grand.

In addition to his Thoroughbred wins, Prescott has accumulated 110 Quarter Horse victories worth $2.5 million in purse earnings. His biggest win to date was recorded in the 2015 $199,200 Gordon Mobley Futurity aboard Megatron Harry.

When asked about what has changed for him over the past 23 years of riding, Prescott says, “It really hasn’t changed much. It doesn’t get any easier. You still have to put in the work and the hours.”