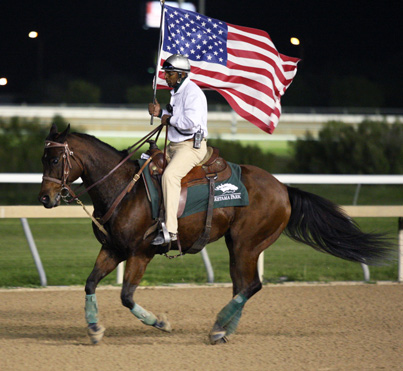 An evening at Retama Park brings out all the atmosphere of the sport of horse racing with teams of horses and jockeys, trainers with their horses in the paddock and so on. But there is another team that often goes overlooked, the outriders. For nine years, Jon Boxie has been leading the horses to the track for the post parade, and much of that time has been with his beloved partner Riley. Jon has had Riley since he was a foal, and together they have stood watch at the San Antonio-area oval in the mornings and during the races at night. It’s a job of keeping people safe.

A native of Arnaudville Louisiana, Jon Boxie started training horses back in the late 1980’s, and as for the sport of horse racing, Boxie says, “I‘ll be involved in horse racing the rest of my life.”

He added, “I love the sport and the people in it.”

Jon’s equine partner Riley will be retiring this Saturday. After years of running down loose horses, serving as a security blanket for young horses coming to the track and even assisting the gate crew in helping horses load into the gate when a bigger body is needed, and of course his traditional gallop with Old Glory on the Fourth of July.

Riley’s duties will be assigned to several of Jon’s new team members, there’s Max (a buckskin), Blondie (palomino), Boomer (Paint) and former racehorse Proteaus. They’ll have big shoes to fill, but they have the right coach to get them there. When it’s a hobby it’s fun, when it’s a sport you play to win, when it’s your job, you do your best. For Jon Boxie, when it’s horse racing, it’s a lifetime.