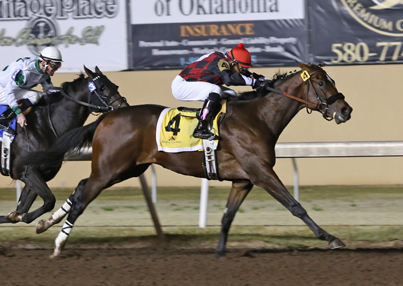 After being held for 20 years at Louisiana Downs, the Razorback and Lady Razorback futurities for Arkansas-breds shifted to Remington Park, and this year’s editions on November 8 featured a big longshot and a heavy favorite.

In the $50,000 Razorback Futurity, Touchdown Arkansas scored a surprising 29-1 upset as the longest shot in the field. Ridden by Bryan McNeil for trainer W.T. Howard, the bay colt by Artie Schiller took the lead on the turn and went on to win by 1 ¼ lengths in a time of 1:11.19 for six furlongs. Bred by Lewis Matthews Jr., the bay runs for Matthews and Frank Fletcher Racing Operations. Touchdown Arkansas, who earned $85 in his only other start after fading to finish 10th against maidens at Remington, earned $30,000 for the win.

Mark Breen’s Indygo Bo, a son of Indygo Shiner bred by McDowell Farm, took second as the 1-10 favorite. The colt has broken his maiden at Arlington Park and then finished sixth against allowance foes at Keeneland. Southern Springs Stables’ homebred All Aboard, a Silver Train gelding who won a $50,000 maiden claimer last time out at Keeneland, finished third.

The $50,000 Lady Razorback Futurity featured a showdown between favorites Patchofbadweather and Auntcris’sshoes, and at the wire Patchofbadweather prevailed by 1 ¾ lengths. Piloted by Glen Murphy for trainer Karl Broberg and owner Flurry Racing Stables Inc., the daughter of Storm and a Half stopped the timer at 1:12.61. Patchofbadweather, who was bred by John Anthony, had finished second to eventual stakes winner Seriously Silver in a Remington maiden race in October. Her earnings now stand at $35,515 after two starts.

Ben Soto’s Auntcris’sshoes, a filly by Commander’s Shoes bred by Philip Longtin, finished second to hit the board for the fourth consecutive time. She broke her maiden at Louisiana Downs and has earned $30,100 with a record of 5-1-3-0. Sanders Brothers’ homebred first-time starter Be My Caroline, by Storm and a Half, finished third.