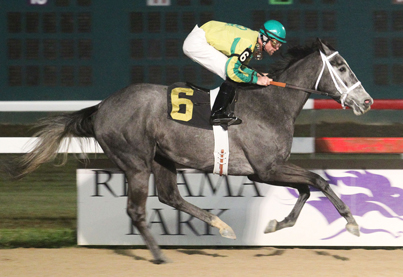 Saturday was a big night for progeny of the stallions at Valor Farm, as three different sires standing at the facility near Pilot Point, Texas, combined to take five of the six top-three finishers in the two divisions of the Texas Stallion Stakes at Retama Park.

In the $75,000 Darby’s Daughter division for 2-year-old fillies, Robert and Myrna Luttrell’s homebred Promise Me Silver romped to a 7 ¼-length victory as the 1-5 favorite. Cliff Berry rode the filly by Silver City, Texas’ leading freshman stallion, to a six-furlong clocking in 1:12.57. Bret Calhoun trains the Texas-bred, who is now undefeated with three wins from three starts and earnings of $123,355. She broke her maiden at Lone Star Park in May and then took the $108,300 Debutante Stakes at Churchill Downs in June.

In the $75,000 My Dandy division for colts and geldings, R.A. Hill Stable and Reeves Thoroughbred Racing’s W V Jetsetter enjoyed a big return to his home state as he drew clear to a six-length victory. Jamie Theriot piloted the colt by Valor Farm stallion Jet Phone for trainer George Weaver. Bred by the late Clarence Scharbauer Jr., who owned Valor Farm, W V Jetsetter covered six furlongs in 1:11.65. The colt began his career in Texas, where he broke his maiden and captured the TTA Sales Futurity at Lone Star. He then went east and finished third in the $300,000 Toyota Saratoga Special Stakes (G2) at Saratoga in New York and finished off the board in the $500,000 Claiborne Breeders’ Futurity (G1) at Keeneland in Kentucky. His earnings now stand at $142,296.

Silver Hill, a Silver City runner bred by Clarence Scharbauer Jr. and now owned by his son Douglas, closed to finish second. The gelding had also been facing graded stakes foes with a second in the Bashford Manor Stakes (G3) at Churchill Downs and a fifth in the Sanford Stakes (G3) at Saratoga. The lone horse not sired by a Valor Farm stallion to hit the board in the two stakes was Henry Witt Jr.’s homebred Witt Six, a gelding by Drums of Thunder.