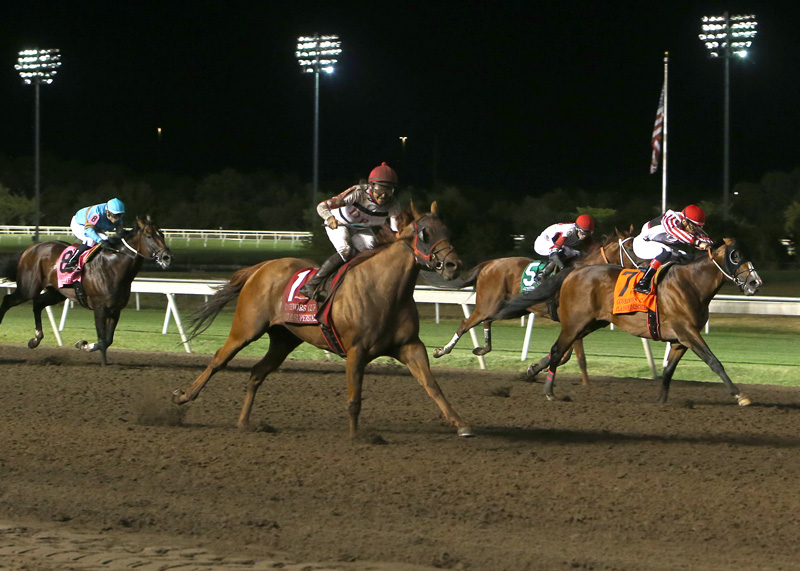 The highly anticipated rematch between Rated R Superstar and Plainsman never developed in Friday night’s $175,000 Governor’s Cup as the former won the race for the second year in a row while the latter faded badly.

Prior to last year’s race, Remington Park’s all-time winningest owner Danny Caldwell of Poteau, Okla., had never won this race and now he has won it twice. Those two wins and all his others gave him 397 wins at the Oklahoma City track.

Plainsman was forwardly placed in third but began to fade badly early in the final turn as Rated R Superstar had just begun to rally from the back of the pack. It was Flash of Mischief, last year’s St. Louis Derby winner, that jockey David Cabrera, aboard the winner, would have to pass for the victory.

“He was ready for it when I asked him for all he had (in the stretch),” said Cabrera, who has won the past four riding titles at Remington Park. This was his first stakes win since suffering injury in a riding mishap at Oaklawn Park in Hot Springs, Ark., in April and was forced to stop riding for three months.

“I want to say how much I really appreciated Danny for giving me these kind of opportunities since my injury,” said Cabrera, who suffered neck, back and facial injuries in the spill.

Caldwell appreciates Cabrera and also the 9-year-old horse that put him in the winner’s circle again, Rated R Superstar, a son of Kodiak Kowboy, out of the Cold Case mare Wicked Wish. Federico Villafranco trains this multiple stakes-winner who was bred in Kentucky by Thorndale Stable.

“I knew Freddy had him ready when I saw him work the other morning,” said Caldwell. “He (Rated R Superstar) was fresh and kicking around and wanted to bite someone. He’s an old veteran that knows what to do and when it’s game time.”

Rated R Superstar and Plainsman had taken turns beating each other in stakes races at Oaklawn all spring, but this was not Plainsman’s night. Sent off as the 6-5 wagering favorite, he finished next to last in the field of seven horses. Ethical Judgement was scratched prior to the race. The winner was a generous 7-2 on the toteboard at post-time and came from sixth to win by 1-1/2 lengths.

Flash of Mischief was bet heavily at the end of the wagering cycle and went off as the second favorite at 7-5 odds. The longshot Catdaddy (28-1) was another 2-1/2 lengths back in third. The remaining order of finish in the Governor’s Cup was Tiz Life (4th), Oliver (5th), Plainsman (6th) and Box Seat (7th).

It was the third stakes win of the year for the old hard-knocking Rated R Superstar. He also won two at Oaklawn, both with Cabrera up. Cabrera, who lives in Jones, Okla., won his first riding title this year at Oaklawn despite missing the final month of that meet. He booted Rated R Superstar home to the winner’s circle in the $150,000 Fifth Season Stakes at the Arkansas track on Jan. 15 and then in the Grade 3, $500,000 Essex Handicap on March 19.

Rated R Superstar became the fourth horse in Remington Park history to win this race in consecutive years. Sportin Okie got things started by taking home the trophy in 1989-90, followed by Cimarron Secret in 1995-96 and lastly by Mr Ross in 1999-2000. It had been 22 years since it had happened.