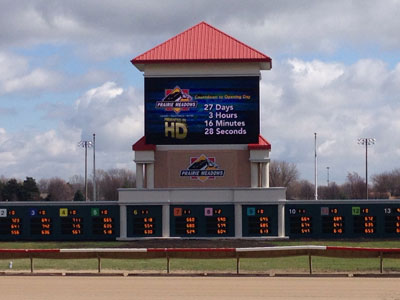 With the start of the 2016 live racing season fast approaching, Prairie Meadows Racetrack and Casino has put the finishing touches on multi-million dollar upgrades, improvements, and renovations in television and hospitality.

In preparation for the upcoming season, Prairie Meadows worked in partnership with American Teletimer during the offseason to convert the entire television department to high definition.

When racing returns to this Altoona, IA oval on Thursday April 28, on-track fans and off-site viewers will immediately notice major changes to the infield tote board and a fresh “new look” on the simulcast feed.

There will be two 9×33’ High Definition “information boards” on either side of the all-new LED odds and wagering totals in the center of the tote board.
And a jumbo 18×31’ High Definition Daktronics video screen, similar to those installed at major tracks like Keeneland and Del Mar, will sit atop the tote board to provide a crystal clear view of every live race.

“We will have expanded capabilities all over the facility,” said Television Manager Ryan Dunn. “We will have the ability to incorporate multiple assets into the race day television programming, including social media content. We will be able to take viewers into new places they’ve never seen before on a simulcast signal.”

Dunn added that the system-wide high definition upgrade increases the total number of cameras on the signal from 9 to 14, including new cameras on the starting gate, in the stewards stand, in the announcer’s booth, and a wireless camera that will provide coverage of the entire track apron and infield.

On the hospitality side, AJ’s Steakhouse – a favorite gathering place for Prairie Meadows horsemen – has undergone significant expansion and renovations since the end of the 2015 racing season.

“We have completely changed the look and feel of AJ’s Steakhouse,” said Clay Willey, Director of Hospitality. “We expanded the lounge area, installed a larger bar, and increased the seating to 44. Overall, we opened up the dining room area, brightened the look, and upped the total capacity to over 200.”

Willey noted that with changes to the racing schedule, including Saturday afternoon racing, AJ’s will have adjusted hours to meet the needs of the horsemen.

“We will also re-open the backside kitchen in the stable area,” Willey added. “Normal hours will be 6:00 AM to 1:30 PM Wednesday through Sunday. The kitchen will also be open on Monday, May 30 and Monday, July 4.”

And just inside the track apron doors, Hop’s Lounge – another popular race day spot for horsemen and fans alike – has also undergone renovation for the 2016 racing season.