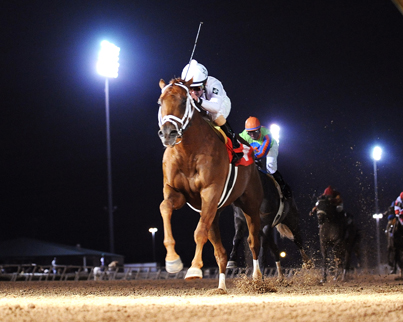 The 4-year-old son of Giant’s Causeway is owned by WinStar Farm and Twin Creeks Racing Stable and was making just his sixth career start. His lone stakes appearance was a fourth-place finish in the Grade 3 Hill Prince on the Belmont Park turf course on June 15.

Pletcher had high hopes for the colt last year, but knew he was not ready for the Kentucky Derby trail. He liked what he saw in his solid runner-up finish in a $62,500 allowance on January 17 at Gulfstream Park, noting that the winner, Bradester, went on to win the Grade 3 Mineshaft Stakes at Fair Grounds.

The prominent horsemen shipped Red Rifle into Houston on Wednesday and tabbed Robby Albarado for the riding assignment. Albarado has won the Maxxam three other times, scoring with Valhol (2003); Alumni Hall (2005) and Student Council (2007), and was an extremely confident pilot this time around. Breaking from the rail, Albarado sent the chestnut colt to the lead, covering the first quarter mile in :23.82 and the half-mile in :48.02. His closest rival was Frac Daddy, with Shane Laviolette in the irons, but Red Rifle kept powering on, drawing off to a 2 ¾-length score in 1:48.73. That set a new track record for the distance of a mile and one-eighth, surpassing the time of 1:48.75 set by Lost Soldier in the 1997 Maxxam Gold Cup.

“He broke in a little bit of a tangle,” said Albarado. “But I had simple instructions to get him to the lead as he does not like dirt in his face. He got to the first turn within himself, settled and came home really nicely. This is a great stepping-stone race for the rest of the year.”

Ginny Depasquale, who has been one of Pletcher’s assistants for the past 17 years, handled the saddling duties.

“Robby worked him at the Fair Grounds on Monday and gave him a really good ride tonight,” said Depasquale. “The horse showed what he is made of. He definitely has the talent. I’m not sure what Todd has in mind for him next, but I was very pleased to see this effort tonight.”

“It was a good race,” said McPeek. “He’s been a really nice horse from the beginning. There’s no disgrace in running second when a track record has been broken. We’ve been back and forth on whether he’s a turf or dirt horse but he can run on either. He ran a solid race so I am pleased.”

McPeek was also at Sam Houston in 2002 to saddle the incomparable Take Charge Lady in the $275,000 NTRA Great State Challenge Distaff.

Ibaka Goes Gate to Wire in the $50,000 Heritage Stakes
Two weeks ago Ibaka came flying from last to first to capture the $75,000 Jim’s Orbit division of the Texas Stallion Stakes for his proud owner and breeder Doug Wall of Norman, Oklahoma. The 3-year-old Oklahoma-bred son of Texas stallion Uncle Abbie was impressive again, winning the $50,000 Texas Heritage Stakes against open company in front-running fashion.

“They told me to be aggressive with him,” said jockey Lindey Wade. “I was hoping for a sharp break but didn’t think I would be in front. He put me there so I just tried to get him to relax and it was all him from there. He just surged on down the lane. One thing about the Calhoun horses, they always give you more.”

“He showed us that the time didn’t matter,” said assistant Jay Severs of the quick turnaround since the Jim’s Orbit and the third consecutive win for the Oklahoma-bred.

Owner and breeder Doug Wall was very pleased with the victory and traded in his “Ibaka” t-shirt for a Kentucky Derby shirt.

“Someone from Oklahoma needs to win the Kentucky Derby and it might as well be him,” said Wall. “This is a great horse; he has won four races with four different riders. We are very proud.”

It was a sweet victory for trainer Bret Calhoun, who sent Worldventurer to Houston for the 2013 Texas Heritage but was denied by a sensational performance by the undefeated Departing.

Last year, Departing, owned and bred by Claiborne Farm and Adele B. Dilschneider, made his stakes debut in the Texas Heritage, and went on to win three graded stakes including the $750,000 Illinois Derby.

Always Kitten Victorious in the $50,000 Jersey Lilly Stakes
Always Kitten, a 4-year-old daughter of Kitten’s Joy, came from the clouds under jockey Rosie Napravnik to capture the $50,000 Jersey Lilly Stakes. This was the second year in a row that Napravnik and trainer Mike Maker delivered the trophy to Eclipse Award-winning owners and breeders Kenneth and Sarah Ramsey. Last year, they were victorious with Artemus Kitten, another quality filly by the Ramsey’s stallion Kitten’s Joy.

Brown Eyes Blue was sent to the lead under Albarado, while Napravnik, who has not only won multiple stakes on the Connally Turf Course, but broken her own track record in five-furlong sprint stakes at Sam Houston, gave her usual perfectly timed ride. She was still in seventh position at the top of the stretch, but drew her mount to the outside and kicked home to win by a neck. Her final time in the mile and one-sixteenth turf stakes, over the firm course, was 1.45.57.

“This is a really nice filly,” said Napravnik. “I knew she liked to come from off the pace, and finished with plenty left.”

“It was a very good effort,” said Joe Sharpe, assistant to Maker. “It is a privilege to train these Kitten Joys.”

Every Way, one of two fillies in the race trained by Michael Stidham, finished second under rider E. T. Baird. A pair of Texas-breds finished in a dead heat for third with Sylvia Baird’s homebred Smiles Golden Song, a three-time stakes winner by Valor Farm stallion My Golden Song, and Rugged Cross Racing’s Vilao, a stakes winner by Grave Digger, both finishing just two necks behind the winner.

“She ran her heart out” said Baird of the City Zip daughter bred by Pink Oak Stable. “I knew she (Rosie’s horse) was coming but what can you do?”