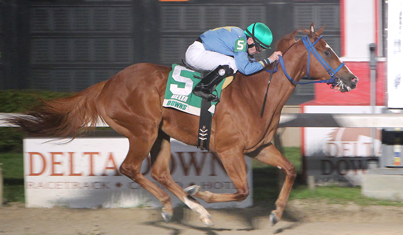 Ide Be Cool kept his career record perfect on Saturday night at Delta Downs as he won his sixth race in a row while dominating four Louisiana-bred rivals in the $100,000 Pelican Stakes. The Henry Ray Dunn owned and trained gelding also won the Louisiana Legacy Stakes and the Louisiana Premier Night Prince at Delta Downs earlier this season.

After breaking alertly from the outside post position in a field of five, Ide Be Cool immediately went to the lead under jockey Chris Rosier. Committed to the pace-setter role, Ide Be Cool relaxed nicely in front and cruised around the racetrack in the 7 ½-furlong test while holding off all the competition and recording a two-length victory over Kapenta. He was never challenged on the lead. It was another 2 ¼ lengths back to Sunken Road in third.

The victory placed another $60,000 into the career bankroll of Ide Be Cool, which raised his overall total up to $324,600 with six wins in as many starts. Rosier has been aboard Ide Be Cool for five of his six tallies. He was ridden to victory by Filemon Rodriguez in his career debut last summer at Louisiana Downs.

Ide Be Cool is a 3-year-old chestnut runner by Ide out of the Bowman’s Band mare Cool Climate. He was bred in the Bayou State by Gulf Haven Farms. Ide, the 2013 Andrew L. “Red” Erwin leading stallion in Louisiana, has sired 16 stakes winners, 35 stakes horses and the earners of more than $23 million. He stands at Clear Creek Stud in Folsom, Louisiana, for a 2014 fee of $2,000 payable September 1st.