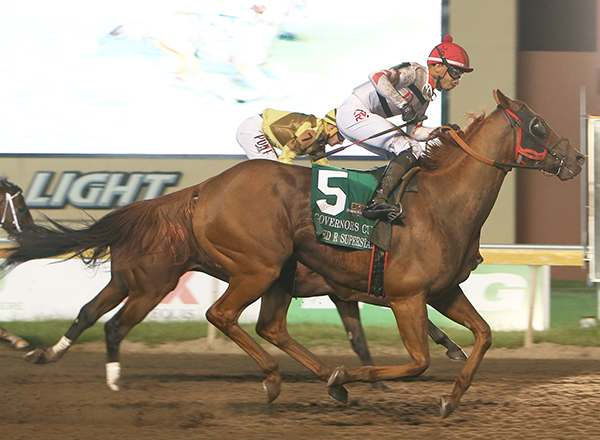 Last year, only a neck separated Plainsman and Rated R Superstar in the $175,000 Governor’s Cup with the latter getting the best of it at the wire as the winner in this stakes race.

Despite the loss, Plainsman, a 7-year-old horse trained by Brad Cox has been made the 9-5 morning line favorite over Rated R Superstar at 4-1 odds in the line. The pair will leave the starting gate, next to each other, from post positions one (Rated R Superstar) and two (Plainsman) in the 1-1/8 miles Governor’s Cup.

In last year’s Governor’s Cup, Plainsman, the 6-5 betting favorite, engaged in a speed duel in the early going with Hunka Burning Love and that horse wore him down just enough. Jockey Ramon Vazquez managed to get Rated R Superstar to come from next-to-last at the half-mile pole and get up in the last jumps for the win.

After losing to Rated R Superstar in last year’s Governor’s Cup, Plainsman, a son of Flatter, out of the Street Sense mare S S Pinafore, made his next stop Churchill Downs in Louisville, Ky., and immediately won the Grade 3, $300,000 Ack Ack at one mile on Oct. 2.

Plainsman and Rated R Superstar did not meet again until this spring when they faced off at 1-1/16th miles in the Grade 3, $600,000 Razorback Handicap on Feb. 12 at Oaklawn in Hot Springs, Ark. Plainsman was the winner this time by a neck over Shelby. Rated R Superstar finished fifth, 2-3/4 lengths behind. However, Rated R Superstar, a gelded Kentucky-bred son of Kodiak Kowboy, out of the Gold Case mare Wicked Wish, then gained his revenge over Plainsman at 1-1/16th miles in the Grade 3, $500,000 Essex Handicap in March at Oaklawn, winning easily by 2-1/4 lengths.

Plainsman ran second in the Essex as the 9-5 second wagering favorite. Rated R Superstar was sent off at 8-1 odds in that stakes race. Plainsman is owned by Shortleaf Stable of Hot Springs.

Rated R Superstar, is a 9-year-old gelding from Federico Villafranco’s barn for Remington Park’s all-time winningest owner Danny Caldwell of Poteau, Okla. David Cabrera gets the riding call Villafranco. He has won the riding title at Remington Park the last four seasons in a row. Cox, the fourth-leading trainer in the country in money earnings, according to Equibase statistics, will give a leg up to Reylu Gutierrez.

Cabrera won his first riding title at Oaklawn Park this spring despite missing the final month after a serious accident on-track that sent him to the hospital and laid him up for three months in all.

Caldwell has 396 wins as a Thoroughbred owner at Remington Park. Rated R Superstar put him in the winner’s circle for his first Governor’s Cup score. The race is traditionally the first stakes race of the Remington Park season.

There appears to be a lot of speed in the Governor’s Cup again this year with Plainsman, Ethical Judgement, Flash of Mischief and Tiz Life all possessing an early turn of foot. Ethical Judgement from the barn of trainer Brendan Walsh for owner Phoenix Thoroughbred III of Lexington, Ky., was made the 3-1 second morning-line favorite in this year’s Governor’s Cup. Jockey Stewart Elliott gets the mount. This 4-year-old colt by Honor Code, out of the Smart Strike mare Give My Regards, has yet to be stakes-placed, but is coming off an allowance-optional claiming win at Ellis Park in Kentucky by a neck.

Ethical Judgement has only raced eight times, with three wins and two seconds for $189,068.

The Governor’s Cup is the eighth of nine races Opening Night with a schedule post time of 10:23. Here is the eight-horse field for with post position, horse, jockey, trainer and morning line odds:
(s) – supplemental entry fee

Opening Night at Remington Park
A total of 87 entered the nine races Friday evening for an average field size of 9.6. The total purses for the evening total $381,925 with the $175,000 Governor’s Cup topping the night.

A 5-1/2 furlong sprint for $5,000-level Oklahoma-bred claimers, 3-year-olds and older, will begin the season. A group of eight will contest the opener over the main track.

A pair of turf races, both at two turns, take place opening night. In race six, maidens aged three, four and five, will go one mile with a field of 11 attempting to graduate to the ranks of winners. The ninth and final race on the program is an allowance event at 7-1/2 furlongs for fillies and mares, 3 and older, with 12 entered to wrap up the initial evening of the season.

Remington Park will stay with Friday and Saturday racing through the remainder of August. The first race nightly is 7:07pm. All times Central.