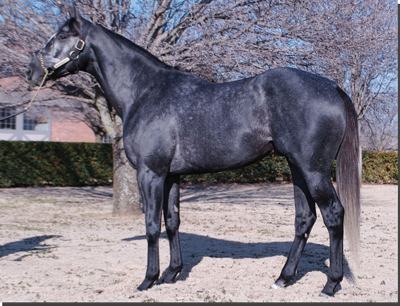 Texas stallion My Golden Song died on August 6 of natural causes at Valor Farm in Pilot Point, Texas. The son of Unbridled’s Song was 19.A model of consistency as a stallion, My Golden Song was Texas’ leading freshman sire in 2011 and perennially ranked among the top five sires in the state for the following decade. He sired two Texas-bred graded stakes winners: Thegirlinthatsong and Fiftyshadesofgold.

“I called him ‘Big Gray,’ said Valor Farm General Manager, Donny Denton. “He was a very imposing individual from the first day he stepped off the van here at the farm. He was extremely well-balanced, big and strong. That carried over into his offspring. It was truly a pleasure to be with him through his career. He will be missed by everyone here at Valor Farm.”

Thegirlinthatsong earned $480,195 during a career highlighted by a victory in the Grade 2 La Canada Stakes and a third-place finish in the Grade 1 Santa Margarita Stakes, both at Santa Anita. She also earned a stakes win in her home state at Lone Star Park.

Fiftyshadesofgold earned $420,531 in nine starts with wins in the Debutante Stakes and Grade 3 Eight Belles Stakes at Churchill Downs. She also had a stakes win in Texas at Sam Houston Race Park, and she finished fourth, beaten just over a length, in the Grade 1 Test Stakes at Saratoga. Fiftyshadesofgold was a true Texas-bred, as the 2014 Texas Horse of the Year was out of the Texas-bred mare Hadif Cat, who was a daughter of longtime leading Texas stallion and former Valor Farm resident Hadif.

Through August 8, My Golden Song was on the verge of surpassing $9 million in total progeny earnings. He is represented by 16 stakes winners and 32 stakes horses.

Undefeated in two starts as a 2-year-old, My Golden Song placed in two stakes as a 3-year-old, including a third-place finish behind eventual Kentucky Derby winner Barbaro in the Grade 3 Holy Bull Stakes.