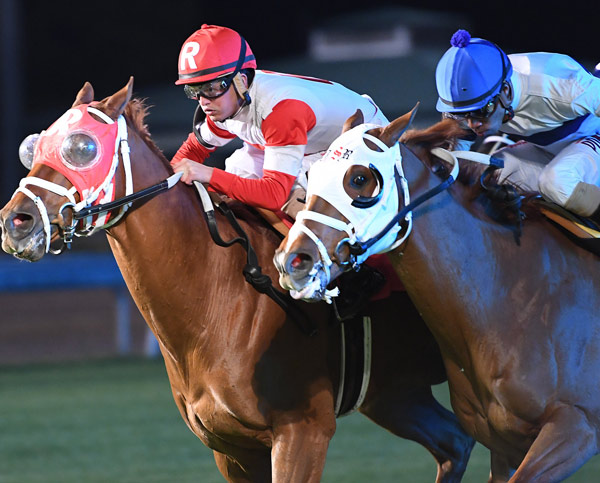 Partly Mocha, owned by Sarah and Kenneth Ramsey and trained by Mike Maker was named 2017 Horse of the Meet for the Thoroughbred racing season at Sam Houston Race Park.

The 8-year-old son of Half Ours out of the Maria’s Mon mare Chocolate Mon, trained by Mike Maker, won two stakes here this season. His first score came in the $75,000 Frontier Utilities Turf Sprint on January 29 with a rail-skimming ride by Jose Ortiz. He returned one month later in the $50,000 Bucharest Turf Sprint showing his versatility by coming off the pace and rallying off the pace for a neck victory under Colby Hernandez.

Bred in West Virginia by Mr. & Mrs. John Michael Link, the chestnut gelding was stakes-placed at Saratoga, Charles Town and Gulfstream before winning his two turf sprints in Houston. His record now stands at nine wins from 36 starts with earnings of $445,392.

“He’s a cool horse and very deserving,” said Maker. “He has overcome some eye issues and although he is eight, has plenty left. I hope to bring him back to Houston next year.”

Maker, who has a stellar record with his turf specialists on the Connally Turf Course, reports that Partly Mocha is training well and will likely make his next start in the Grade 2, $200,000 Shakertown at Keeneland on April 8.

Steve Asmussen Notches His Ninth Leading Trainer Title
The leading owner, trainer and jockey awards were also presented on the final day of the meeting. Steve Asmussen, won his ninth training title at the northwest Houston racetrack, finishing the meet with 29 wins. He was honored as top trainer here in 2000, 2002, 2003, 2004, 2005, 2014, 2015 and 2016.

Asmussen started 86 horses, finishing with a record of 29 wins, 19 seconds, 12 thirds and earnings of $377,222. He had a variety of runners, from first-time starters, turf specialists to aged veterans. His stakes winners this season included Iron Fist for the partnership of Stonestreet Stables LLC and Regis Racing in the $100,000 Maxxam Gold Cup; Union Jackson, also owned by Stonestreet Stables LLC, the blazing fast $50,000 Sam Houston Sprint Cup champion and Magna Breeze, who he claimed last summer for $5,000. The 7-year-old took the $50,000 Houston Turf on February 11 in gate to wire fashion under jockey Iram Diego.

Asmussen continues to be a loyal supporter of Texas racing. Inducted last August into the National Museum Racing Hall of Fame. He and his family reside in Arlington, Texas and his parents Keith and Marilyn operate a training center in Laredo.

“We had a really great meet; we really did,” said Asmussen. “I don’t know if people know what incredible track surfaces there are at Sam Houston. Year after year, I am able to run considerably older horses here. They come out of their races sound, with fresh legs and do well for the remainder of the year.”

“He does a tremendous job,” said Asmussen of Ocampo, who will head next to Lone Star Park. “He is the longest continuous employee I have ever had! Without a doubt, Pablo has played an important role in each of the Houston titles.”

Mindy Willis had an outstanding season, finishing second in the standings with 17 wins. Karl Broberg was third with 16 victories followed by Bret Calhoun, who won six stakes to finish with 15 wins and the second-highest earnings of $315,876. Conditioner Danny Pish rounded out the top five, saddling 14 winners.

Iram Diego Repeats as Leading Rider
Jockey Iram Vargas Diego repeated as leading rider at Sam Houston Race Park; the second title of his career. The 37-year-old jockey was born in Guerrero, Mexico and came to the United States in 2001. He began hot walking horses in Illinois and started galloping at Fairmont Park. Diego has ridden in Texas for the past four years, and has steadily earned the respect of horsemen.

For the second year in a row, Asmussen tabbed Diego to ride first call for the Sam Houston meet, citing his work ethic and consistency. From January 20 through March 14, Diego rode 172 horses, winning the title with a record of 49 wins, 32 seconds and 22 third-place finishes. His mounts earned $597,468.

“I want to thank God and the trainers and owners who gave me such a great opportunity,” said Diego. “For Steve to have confidence in me means so much. I wasn’t sure I could win my second title here as DeShawn (Parker), David (Cabrera) and Lindey (Wade) are all such good riders. It has been a great meet.”

David Cabrera, who was an apprentice here in 2014, won 35 races to finish second in the standings for the third year in a row. The 24-year-old native of Guanajuato, Mexico has leading rider titles at Lone Star Park and Retama Park, and was third in 2016 at Remington Park. DeShawn Parker, who held the title here in 2015, was third with 27 victories and Sasha Risenhoover had an excellent meet, finishing fourth with 26 winning mounts.

Diego won three stakes this meet, guiding each of the Asmussen stakes winners to victory. He was grateful for the opportunity to win his first Maxxam Gold Cup with Iron Fist and admitted he had never ridden a faster horse in his career than Union Jackson!

“Honestly, I have never ridden a horse of that caliber before,” Diego said. “He did everything I asked and did it so easily!”

The married father of three, who resides in Fort Worth, Texas will ship his tack to Lone Star Park for their 2017 Thoroughbred meet, which gets underway on April 20.

“I am very pleased to learn of this honor,” said Espinoza. “Jerenesto and I have worked together for 26 years and he and his crew do an excellent job.”

While they did not team up for a stake win this meet, they won the 2010 Maxxam Gold Cup with Fifteen Love. Espinoza, who resides in San Antonio, won the owner title at Retama Park in 2015. He was second in the 2016 Sam Houston owner standings

The title went down to the wire as Steve Asmussen was in striking distance, but finished in a tie for second End Zone Athletics. Each had ten wins for the season.