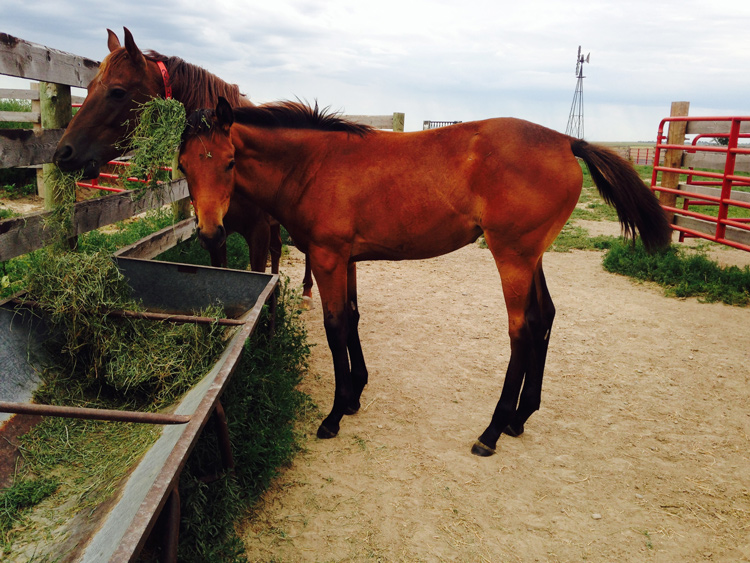 Starting life as an orphan can be tough for humans or horses. In the case of a Thoroughbred, one of the main concerns is getting a foal the milk needed for nutrition and growth in the early stages of life. Nurse mares can play a vital role for an orphaned foal, but only if such a mare is put in place quickly enough, and if both the mare and foal accept the new arrangement. Although proven to be untrue, there is a perception that orphaned foals will not flourish, as they are always trying to “catch up” to their counterparts who had the benefit of nursing from their actual mother.

In what is surely a racing rarity, a pair of orphaned foals finished first and second in the $43,755 CTBA Lassie on July 9 at Arapahoe Park near Denver, as Last Dragoness prevailed over Emma’s Dilemma in the race for 2-year-old Colorado-bred fillies.

“Just over two weeks after Last Dragoness was born, I lost her mama, Sea Dragoness, to colic,” said Mark Hillman, who bred Last Dragoness and races her in the name of Hilltop Stable. “Little ‘Nessy’ refused all forms of milk substitute, so after a week I was desperate and found Jim and Nancy Pearson’s JNP Horses in Hugo, Oklahoma. Jim was bailing hay and coordinated with Nancy, who brought our nurse mare ‘Rose’ within 24 hours. It took about two weeks for Rose to finally let Nessy nurse without her head being tied, but she finally did.”

Last Dragoness, a daughter of stallion Smoke Glacken, has turned out to be quite a racehorse, as she now has two wins in as many starts and has banked $32,073. The filly is trained by John Hammes and was ridden in the CTBA Lassie by Alfredo Triana Jr.

Bill Vanlandingham’s homebred Emma’s Dilemma, a daughter of Crafty Shaw trained by Kenneth Gleason, also got her start in life thanks to JNP Horses.

“A month or so later, Bill called me because he’d lost his good mare Vanasee, who had Emma’s Dilemma at her side,” Hillman said. “A mutual friend told Bill about my experience, so he called JNP and they brought him a mare, too. Bill was lucky; his nurse mare accepted his foal in three days, if I recall correctly.”

Emma’s Dilemma now has a win and two seconds in three starts with earnings of $17,771.

“JNP Horses, along with similar operations, do some great, tireless work for breeders,” added Hillman. “That work might go unnoticed sometimes, but it’s so valuable in situations like these two orphaned foals.”