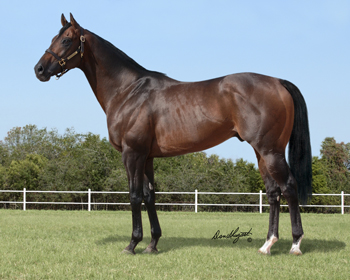 A $600,000 2-year-old purchase by Bob and Beverly Lewis who was trained by D. Wayne Lukas, Going Wild won seven of 35 career starts and banked $513,200. He recorded a total of six stakes wins, including the listed San Miguel and Sham stakes at Santa Anita, and also placed in the Grade 2 Santa Catalina Stakes and Grade 3 Kentucky Cup Sprint. Among the horses he defeated in the Sham Stakes was eventual Kentucky Derby winner Giacomo.

As a stallion, Going Wild was coming his best year in 2015 with seven winners from nine runners. His leading runner is Mancation, an earner of $84,322 who won the 2014 New Mexico Breeders’ Derby at Sunland Park. Going Wild is also the sire of multiple stakes placed Vernissage.

“Going Wild was an extremely kind and friendly stallion,” said Cope. “He would meet me at the gate and beg for attention to be petted, or for hands full of grass, or pears and apples in season from our trees, located just out of his reach. I didn’t realize how many times I looked out my kitchen window to view him, until he was no longer there.

“Going Wild’s foals exhibit the same friendly and welcoming personality. They are the greatest foal crops that I ever raised in 48 years of horse breeding. I believe over time the passing of Going Wild will reveal a severe blow to the Oklahoma Thoroughbred industry: a loss of tremendous bloodlines and of future foal crops for those many persons who cannot afford to breed in Kentucky.  My dearest Going Wild is sorely missed.”