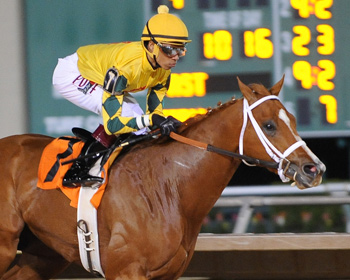 Bravura, the only winner of two stakes races in the 2016 Sam Houston Race Park Thoroughbred meet, was named 2016 Horse of the Meet.

Bred and owned by Victoria Ashford of Dallas, Texas, Bravura is a 3-year-old son of Valor Farm stallion Early Flyer out of the Hadif mare Coryphee. Trained by Bret Calhoun, the chestnut colt broke his maiden at first asking last June at Lone Star Park and competed in stakes at Monmouth Park, Retama Park and Remington Park.

Calhoun sent him to Sam Houston Race Park where he won the $50,000 Groovy Stakes on January 23 and lived up to his heavily favored status in the $75,000 Jim’s Orbit division of the Clarence Scharbauer Jr. Texas Stallion Stakes last month. Jockey C. J. McMahon guided the chestnut colt in both wins, and his time of 1:10.59 in the Jim’s Orbit was one of the quickest times of the 2016 Sam Houston Race Park meet.

Ashford has bred racehorses for 25 years was thrilled to learn of the honor.

“I am thrilled as so many outstanding horses ran in Houston this year,” said Ashford. “Bravura was foaled at Valor Farm, and I remember seeing him the day after he was born. He is a very sweet horse, almost like a puppy dog. I share this with Bret; we have worked together through thick and thin and stayed loyal to each other.”

Bravura’s career record stands at four wins from eight career starts and earnings of $139,752.  He is a half-brother to 2014 Sam Houston Race Park Horse of the Meet, Triumph and Song.

Calhoun said Bravura will get a 60-day break and options are open for his next start.

“He’s had a long campaign and will get a well-deserved rest,” said Calhoun. “It is a pleasure to train horses for ‘Tory’; she loves her horses so much and is always concerned for their health and well being. It makes my job very easy.”

Steve Asmussen Notches Leading Trainer and Owner Titles
The leading owner, trainer and jockey awards were also presented on the final day of the meeting. Steve Asmussen, won his eighth training title at the northwest Houston racetrack, finishing the meet with 28 wins. He was honored as top trainer here in 2000, 2002, 2003, 2004, 2005, 2014 and 2015.

Asmussen started 88 horses, finishing with a record of 26 wins, 14 seconds, 16 thirds and earnings of $296,837. His lone stakes win came with Thievery in the $75,000 Two Altazano division of the Texas Stallion Stakes. He had a variety of runners, from first-time starters to aged veterans, and, once again, credited the outstanding track surfaces at Sam Houston.

“Houston has always been very good to us,” said Asmussen. “I cannot state enough how kind the surfaces continue to be. I can run older horses like Pedrolino (10) and Caberneigh (11).  Our younger horses get a good start and do extremely well as they continue their campaigns as the year progresses.”

“He does a tremendous job,” said Asmussen of Ocampo, who ran the Houston string and will head next to Lone Star Park. “Without a doubt, Pablo has played an important role in each of the Houston titles.”

Danny Pish finished second with 21 wins, followed by Karl Broberg with 18 victories and Mindy Willis, who had an outstanding season with 17 wins.

Asmussen continues to support Texas racing. He and his family reside in Arlington, Texas and his parents Keith and Marilyn operate a breeding and training center in Laredo.

Iram Diego Wins His First Leading Rider Title
Jockey Iram Vargas Diego clinched the first leading rider title of his career. The 35-year-old jockey was born in Guerrero, Mexico and came to the United States in 2001. He began hot walking horses in Illinois and started galloping at Fairmount Park. Diego has ridden in Texas for the past three years, and has steadily earned the respect of horsemen.

He finished fifth in the standings last year, but Asmussen tabbed Diego to ride first call for the 2016 Sam Houston meet, citing his work ethic and consistency.  From January 15 through March 8, Diego rode 214 horses, winning the title with a record of 48 wins, 49 seconds and 32 third-place finishes. His mounts earned $598,373.

“I want to thank all the trainers who gave me such a great opportunity,” said Diego. “The support of Steve and George Bryant and my agent, Bradley White, helped me so much. I was hoping for my first leading rider title, and it was not easy with great riders like DeShawn and David chasing me. It means a lot and I thank God.”

David Cabrera, who was an apprentice here in 2014 and second last year, finished second again in the standings with 37 wins. The 23-year-old native of Guanajuato, Mexico has leading rider titles at Lone Star Park and Retama Park. Last year’s leading rider, DeShawn Parker, finished a close third with 37 victories and Lindey Wade, leading rider here in 2011 was fourth with 28 winning mounts.

Diego won two stakes this meet, guiding the Thievery to victory in the $75,000 Two Altazano for Asmussen and Expect Royalty in the $50,000 Houston Distaff for trainer Leroy Pollok.  He will ship his tack to Lone Star Park for their 2016 Thoroughbred meet, which gets underway on April 7.