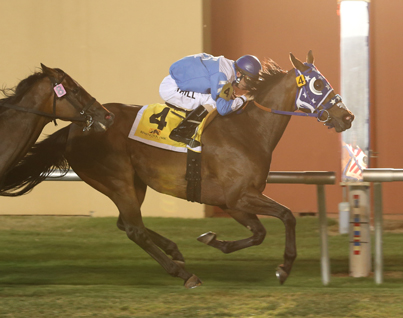 Sooner Superstar had not won a race since she pulled an upset to win the 2013 Red Earth Stakes at Remington Park. Friday night, she ended the winless streak, winning the 2014 $50,000 Red Earth Stakes in front-running style.

The only female in the field of 11 older Oklahoma-breds, Sooner Superstar went to the front from the outset in the 7-1/2 furlong Red Earth Stakes, under jockey Ken Tohill. Owned by Marti Rodriguez and Dwayne Scruggs of Jones, Okla. and trained by Rodriguez, Sooner Superstar was briefly threatened in the stretch run by Polka Joke before pulling away to win by three-quarters of a length.

Sooner Superstar clicked off fractions of :23.57 seconds for a quarter-mile; :46.87 for the half-mile and 1:10.48 for three-quarters of a mile. The swift fractions did not wear out the 5-year-old mare who came through again for her connections in the first Oklahoma-bred stakes race of the Remington Park season.

“She’s great for us,” Rodriguez said after receiving the trophy. “We’re the small guy. We’ve got just a few horses and a few stalls but we’ve got a champion in her.”

Sooner Superstar crossed the finish in 1:28.76 seconds over the firm turf at odds of 10-1. Polka Joke finished second as the beaten 3-1 wagering favorite. Perfect To Please was third, 1-3/4 lengths behind the winner.

A daughter of Ra Ra Superstar from the Skip Away mare Skip A Dare, Sooner Superstar was bred by Allen Poindexter. The win was her fifth from 30 career starts with three of them taking place at Remington Park. The Red Earth Stakes winner’s share of $30,000 moves her lifetime earnings to $193,374.