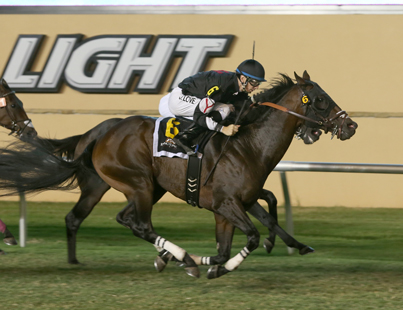 A quality field of turf runners assembled Saturday at Remington Park for the $75,000 Edward J. DeBartolo Memorial Handicap. Bim Bam rallied down the middle of the lane to post a half-length win as the wagering favorite, keeping his local record perfect in the process.

Owned by Chuck and Ella Lou Hagaman of Hot Springs, Ark. and trained by Ron Moquett, Bim Bam was handled by jockey Jareth Loveberry. The 7-year-old Bim Bam came into Remington Park off a win at Mountaineer Park in West Virginia in the Independence Day Stakes in early July. Loveberry had the ride for that win as well, helping him get acquainted with Bim Bam.

In the DeBartolo, Bim Bam was sixth throughout the first half of the race, biding his time before making his run. Off the final turn, Bim Bam rolled outside of rivals, while gaining on the fading pacesetter Bernie The Jet, and Gaelico.

“Along the backside I was in the middle of two horses and I got him settled in,” Loveberry said. “My instructions were to ‘keep him clean’ so when I got him to the outside he just had nice pickup. When I turned for home, I saw Luis (Quinonez, aboard Gaelico) just sitting there. When I switched leads, he had another big kick. As soon as I cleared Unbridled Giant, I started to get after him and switched sticks. I was just thinking ‘keep going and you got it.’ I was waiting for Dreams Cut Short to come and get me but he never could. I was a little worried that speed would carry on this course but he handled it well.”

Gaelico led briefly before Bim Bam moved by in the final yards, holding second at the finish. Dreams Cut Short did make a late run to get up for third, 1-1/2 lengths behind the winner. Bim Bam crossed the finish in 1:42.25 over the firm course.

The win was the ninth from 45 career attempts for Bim Bam and his second straight triumph at Remington Park. The horse posted an allowance win here in November 2013. The first-place check of $44,796 increases the lifetime earnings for Bim Bam to $787,598.

Bred in Florida by J D Farms, Bim Bam is a horse by Deputy Wild Cat from the Colony Light mare Laurel Light. The DeBartolo Handicap was his seventh career turf win.

The DeBartolo Handicap is named in honor of the late founder of Remington Park.

Loveberry is enjoying great success early in his first season at Remington Park. The win on Bim Bam was one of three on the night for him. He also won with Sooner Breeze ($4.40 to win) in race three and Delightful Delilah ($14.80) in the ninth and final race. Loveberry has seven wins through the first six race dates, placing him in a tie atop the jockey standings with Cliff Berry, a 15-time seasonal champion at Remington Park.