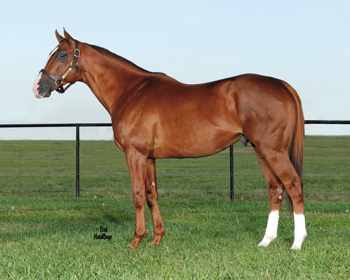 Freshman Oklahoma stallion Save Big Money not only scored with his first winner on July 5 but also his first stakes winner as his daughter Mama’s Mad Money drew clear to a convincing victory in the $72,544 Iowa Stallion Futurity at Prairie Meadows in Iowa. Bred by Center Hills Farm and owned by Big Sugar Racing, the Oklahoma-bred filly won the 5 ½-furlong stakes by 3 ¼ lengths with Sasha Risenhoover aboard for trainer Timothy Martin.

Mama’s Mad Money finished a close second in her racing debut at Prairie Meadows in a $27,000 maiden special weight contest before stepping up to stakes company. Her earnings now stand at $48,866 after two starts.

Save Big Money, who stands at Mighty Acres, a division of Center Hills Farm, in Pryor, Oklahoma, is son of Storm Cat who earned $230,934 on the track with five victories and three stakes-placings. The stallion broke his maiden going 6 1/2 furlongs and then went on to win on both turf and dirt at longer distances; he set a track record at Keeneland Race Course at 1 3/16 miles and finished second in a stakes at 1 5/8 miles.

The 10-year-old stallion, who stood the 2013 season for a $2,000 fee, is out of multiple Grade 1 winner and millionaire Tomiesue’s Delight and a full brother to Grade 1 winner Mr. Sidney.