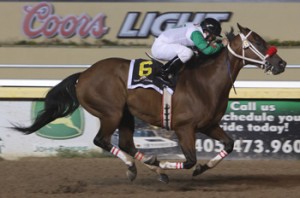 The $50,000 Remington Park Turf Sprint Stakes was moved to the main track due to rainy weather on Friday night. The switch in surface made no difference to Conkigo, as he roared to an easy score in the five-furlong event for Oklahoma-breds.

Owned by Gary Owens of Mustang, Okla., and trained by Martin Lozano, Conkigo was ridden by Martin Escobar. The 6-year-old gelding won his third consecutive race and second in a row this season. He went to his accustomed spot on the lead but had company until mid-stretch as Stickrossmountain and Highway Fiftyfour were determined to make Conkigo work for his score.

“He looked good tonight,” Lozano noted afterwards. “The two horses that went with him, I didn’t expect that but he was able to put them away.”

Conkigo found another gear with just over a furlong left to dispatch his pace-dueling partners and draw clear to win by 4 3/4 lengths in :58.50 seconds. Steal Your Face, the 9-5 wagering favorite, was able to rally from the back of the pack to gain second while Stickrossmountain held for third.

Bred by Owens, Conkigo is by Confide from the Dare And Go mare Wakikigo. The win was his ninth overall and his third at Remington Park. The $30,000 winner’s share for the Sprint Stakes moved his lifetime earnings to $179,356.

Earlier in the night, a $40,000 allowance was held for 3-year-olds at a mile. The race served as a prep event for the $400,000 Oklahoma Derby on Sept. 30. Diamond Joe, the racing star of Nebraska, ventured away from his home state for the first time and won by three-quarters of a length over King Coral. The triumph was the ninth straight for the big chestnut, ridden by Cliff Berry.

Owned by the Nebraska City, Neb. partnership of Joseph Koziol and Edward Joseph Miller, Jr., Diamond Joe is trained by Chuck Turco, a former regular in the Remington Park stable area. Turco saddled Diamond Joe to dominance on the Nebraska racing circuit, winning state-bred stakes events as well as open-company races. All of the wins were around five-furlong tracks, making his Remington Park win around the mile oval here impressive.

“He’s big and still growing and he had to run tonight,” Turco noted. “He hasn’t had to do that much lately. Hopefully the race will tighten him up for the Oklahoma Derby.”

A son of Dazzling Falls, who Turco trained to victory in the 1995 Oklahoma Derby, Arkansas Derby and Alabama Derby, Diamond Joe is from the Tarsal mare Diamond Road. The win made him another $24,000 which boosted his career bankroll to $126,116. The score was his 10th overall and ninth this year, which moved him to the top of the national standings for wins in 2012.

The Diamond Joe win was one of three on the night for Berry who once again took over the top spot in the Remington Park jockey standings. He also triumphed with Flying Barbie ($5.80) in the first race and Numismatist ($10.20) in the eighth. The hat trick gives Berry 20 wins for the season, two ahead of Luis Quinonez.