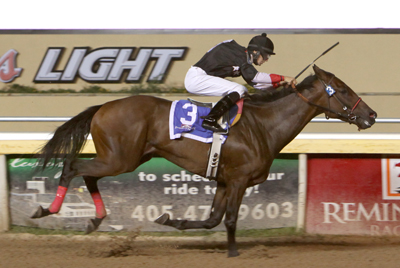 A pair of Oklahoma-bred stakes events for 3-year-olds shared the top billing on Friday, September 21, at Remington Park. Colts and geldings went to the gate in the $50,000 Tishomingo Stakes with Imahit taking control in the stretch after setting the pace. Lady Jensen rolled from last and went around rivals in the stretch to win the $50,000 Te Ata for the fillies.

Tishomingo Stakes
Imahit posted his second straight win this season for owner Clint Gilchrist of Edmond, Oklahoma, and trainer C.R. Trout. Jockey Lindey Wade put Imahit on the lead at the start of the seven furlongs and repelled all challenge attempts while drawing clear to win by two lengths in 1:22.22 over the fast track.

“I was waiting as long as I could when I heard the hollering (from other jockeys) behind me,” Wade noted. “I tried to wait as long as I could and then asked him to respond. When I asked him, he gave it to me. He just stretched those long legs out and extended.”

The Tishomingo was the third career victory from six starts for Imahit, a gelding by Whywhywhy from the Sahm mare Halo Hit. The winner’s share of $30,000 moves his overall money to $70,418. Imahit was bred in Oklahoma by Trout.

The stakes race was named after the great Chickasaw chief Tishomingo, an honorable warrior and advisor to tribal leaders in the late 1700s and early 1800s. The original Chickasaw Nation capitol in Oklahoma was named in his memory.

Te Ata Stakes
While Imahit went to the front and improved his position in his race, Lady Jensen worked the exact opposite strategy in the Te Ata Stakes, settling at the back of the field of eight before making a rally throughout the lone turn into the stretch.

Owned by Kelly Thiesing of Alva, Oklahoma, and trained by Donnie Von Hemel, Lady Jensen sat back behind many front-running types under Luis Quinonez, biding her time before beginning her rally.

“I knew I was going to take her back,” Quinonez said. “It looked like they were going fast. I just had to ride her. We got a good trip, every time I needed a place to go I had it and was able to keep her going all the way to the wire.”

Quinonez left his rail run with a quarter-mile left in the race. He calmly angled Lady Jensen through a seam in the traffic, never suddenly altering her motion or compromising her momentum. Once in the stretch, she cruised by Flatterific who took over the lead at the start of the turn. Lady Jensen crossed the finish 4 1/2 lengths in front of Flatterific, stopping the clock in 1:23.48. Ocean Ahumin was another 1 1/2 lengths behind the runner-up in third.

The Te Ata score was the third from seven lifetime starts for Lady Jensen, a gray 3-year-old filly by Bob And John from the Gate Dancer mare Heather’s Dancer. Bred in Oklahoma by her owner, Lady Jensen made $30,000 in the Te Ata to run her earnings to $76,663.

Te Ata was a master Chickasaw entertainer and storyteller who performed for over 70 years before royalty in Europe and Presidents of the United States. She lived to be 100 years of age.

The win on Lady Jensen moved Quinonez back into a tie atop the jockey standings with Cliff Berry. Both riders have 22 wins on the season.

The 24th-running of the Oklahoma Derby is fast approaching on Sunday, Sept. 30. A stellar stakes-laden program worth more than $1,000,000 will be presented, led by the $400,000 Oklahoma Derby. The special Sunday afternoon of racing is at 1:30pm.