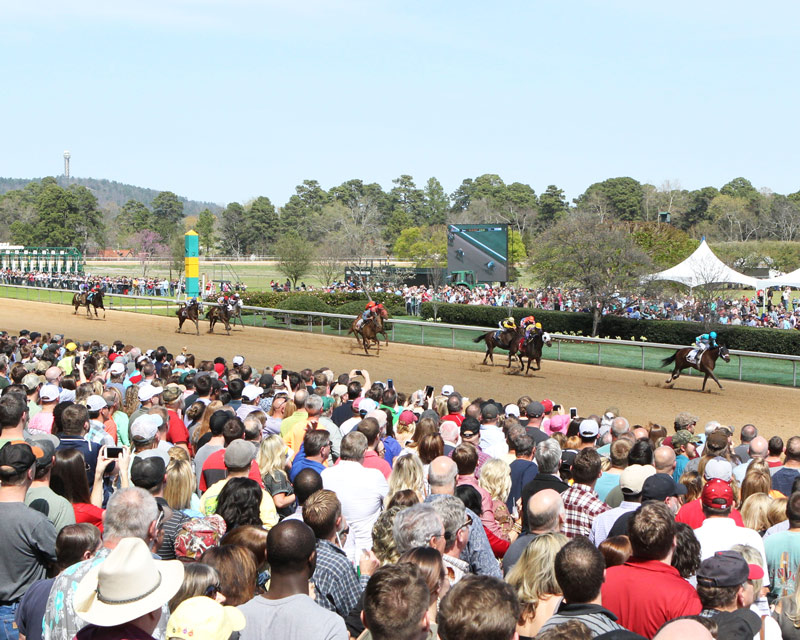 Culminating with 62,500 fans turning out to watch champion Classic Empire win the $1 million Arkansas Derby, the 2017 Oaklawn live racing season concluded with nearly a 5% gain in total handle and another record-setting season for purses.

Horsemen racing at Oaklawn benefited from the country’s highest purse structure for the time of year. Maiden Special Weights grew from $72,000 to $80,000 during the season, while Allowance races ended as high as $84,000 after starting out at $74,000. The record average daily purse distribution of $502,781 also contributed to plenty of action at the claim box with 456 horses claimed for nearly $6.23 million.

“Our goal is to offer our racing fans an entertainment value that is second to none and I couldn’t be more proud of our team for helping us achieve that goal in a big way,” General Manager Wayne Smith said. “I want to congratulate owner Danny Caldwell, trainer Steve Asmussen and jockey Ricardo Santana Jr. for leading our standings. They and all the horsemen helped us put on quite a show. It was a terrific season.”

Asmussen and Santana both enjoyed highly successful meets topped by Gun Runner’s victory in the $500,000 Razorback Handicap (G3) and Ever So Clever’s win in the $400,000 Fantasy Stakes (G3) for Asmussen and Whitmore’s victory in the $400,000 Count Fleet Sprint Handicap (G3) for Santana Jr. Asmussen earned his eighth leading trainer title with 41 victories and $2,763,845 in earnings, while Santana earned his fifth straight leading riding title with 53 wins and $2,753,797 in earnings.

Caldwell earned his fourth leading owner title with 22 wins and $965,728 in earnings. Among his best horses was Domain’s Rap, who won the $125,000 Fifth Season Handicap and finished second in the Oaklawn Handicap (G2).

Oaklawn made a major change to its stakes schedule in 2017, which proved successful, when it increased the purse of the Razorback Handicap to $500,000 and moved it to the Presidents’ Day card along with the $500,000 Southwest Stakes (G3). Race winner Gun Runner went on to finish second to Arrogate in the $10 million Dubai World Cup.

The added excitement in February carried over to March where Oaklawn enjoyed one of its best Rebel Stakes Days. A crowd of 36,000 was on hand and total handle for the day reached $10,752,313.15, which was a non-Arkansas Derby Day record.

“We’re extremely pleased.” Director of Racing David Longinotti said. “Gun Runner set the bar high when he won the Razorback so impressively in February and the quality of our stakes just got better from there. Rebel Stakes Day was super. We had last year’s champion 2-year-old in the Arkansas Derby, thrilling renditions of the Count Fleet Sprint Handicap and Apple Blossom Handicap, and absolutely beautiful weather throughout the final few weeks of the season … a true crescendo. It will be exciting to see what champions Classic Empire and Stellar Wind do from here as well as impressive stakes winners Ever So Clever and Whitmore.”

Among the other highlights of the 2017 season was the Show Bet Bonus, which was designed for casual on-track patrons and offered higher payoffs to customers.

“A lot of our patrons are brand-new racing fans on their first ever trip to a race track,” Longinotti said. “We designed the Show Bet Bonus as a way to introduce new fans to racing in the hopes that they would be able to cash more tickets and have a more enjoyable experience. It exceeded our expectations in the first year.

“Show wagering has become one of our most popular wagers and in fact, the show pool increased 34% over last year,” Longinotti said. “You could hear people in the grandstand every race day talking about their show parlays.”