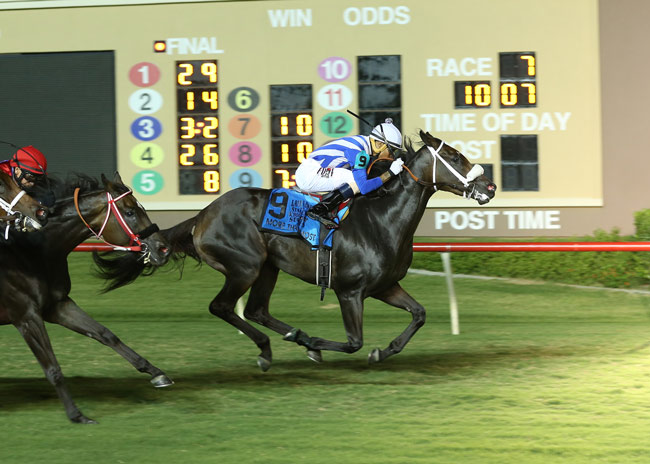 Douglas Scharbauer’s More Than Most, trained by Bret Calhoun, was victorious in Saturday’s 5th running of the Lane’s End Stallion Scholarship Stakes at Lone Star Park.

With jockey C. J. McMahon up, the 3-year-old Texas-bred filly by Indygo Mountain out of Better Than Most, by Elusive Quality completed the seven and a half furlong turf route in 1:26.99. The course was labeled firm.

“With the horse coming on the outside of me the last sixteenth of a mile, the way she dug in was really impressive,” said winning rider C. J. McMahon. “I really like her a lot.”

The win was McMahon’s third on the night’s card, and his third stakes win of the meeting. The horse and rider won the Texas Stallion Stakes earlier in the meet.

More Than Most was joined in the winner’s circle by several scholarship recipients of the Texas Thoroughbred Educational Fund, which is made possible in part from the generous donations of Lane’s End Texas owner William S. Farish, who was also honored that night with the T.I. “Pops” Harkins Award for lifetime achievement from the Texas Thoroughbred Association.