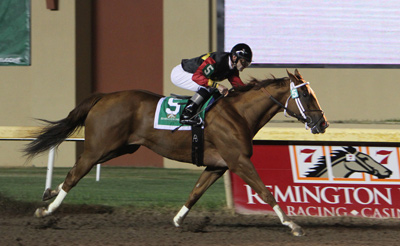 Remington Park featured a stakes doubleheader Friday night for Oklahoma-bred 3-year-olds in the Te Ata Stakes and Tishomingo Stakes. Each event was worth $50,000 and contested at seven furlongs.

More Than Even showcased her talents to win her fourth consecutive event, leading every step of the Te Ata Stakes for fillies. Owned and bred in Oklahoma by Doyle Williams of Jenks, Okla. and trained by Mike Teel, More Than Even was ridden confidently by Alex Birzer. The filly led from the start, setting fractions of :22.50 for a quarter-mile; :45.55 for the half-mile and 1:10.02 for three-quarters of a mile. The front-runner crossed the finish in 1:23.35 with plenty left.

More Than Even began her four-race win streak on April 9 at Will Rogers Downs in Claremore, Okla. A daughter of Stephen Got Even from the Dehere mare Sallybrooke, More Than Even has not trailed in a race since early in the first race of her streak.

More Than Even has won five of 14 attempts and three races at Remington Park including her first two here this season. The Te Ata Stakes winner’s check of $30,000 moves her total earnings to $110,101.

The Te Ata is named in honor of the famed Chickasaw storyteller and entertainer of the 20th century who traveled the world, performing for royalty and for United States presidents.

Tishomingo Stakes
The Oklahoma-bred 3-year-old males were featured in the Tishomingo Stakes with My Brother Don copying the front-running tactic of More Than Even, going on to win while never trailing.

Owned by the Lincoln, Neb. partnership of Ron Wise and Aaron Swan, My Brother Don is trained by Scott Young and was ridden by Glenn Corbett. He set fractions of :22.77 for a quarter-mile; :45.71 for the half-mile and 1:10.10 for three-quarters of a mile. The gelding crossed the seven-furlong finish in 1:22.82 over the fast track, 2-1/2 lengths better than Agent.

Bred in Oklahoma by Ron Wise, My Brother Don is by Fast Play from the Jade Hunter mare Cherry’s Hunter, My Brother Don won his fourth race from 10 career starts and his second at Remington Park. The $30,000 first-place check for the Tishomingo Stakes moves his career money to $96,395.

The Tishomingo Stakes is named in honor of the great Chickasaw warrior, leader and chief who served in the United States military under George Washington and Andrew Jackson. He led the Chickasaws through formative times in a young United States, living to be more than 100-years-old.