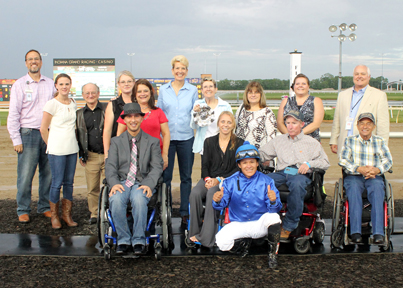 A packed house came together Saturday, May 30 for the second annual “Jockeys & Jeans” at Indiana Grand Racing & Casino. As a result, a total of $201,078 was raised for the Permanently Disabled Jockeys Fund (PDJF) through sponsorships, ticket sales, donations and a live and silent auction that featured more than 100 items.

“Bringing Jockeys & Jeans to Indiana and to the Midwest is another step our company has taken in our commitment to horse racing,” said Jim Brown, president and COO of Centaur, Inc. and general manager of Indiana Grand. “Both of our properties (Indiana Grand and Hoosier Park) continue to work toward the betterment of the sport, and organizations such as PDJF are vital to the growth and well-being of the horse racing industry.”

The evening was emceed by Peter Lurie, nationally known on air racing analyst and handicapper, and coincided with the live racing program at Indiana Grand, which included the $75,000-added Indy Star Stakes and the $75,000-added PDJF Stakes, both held on the turf. Handle for the evening also saw a boost on the 10-race card that included two Quarter Horse races with a total of $969,088 wagered, marking the second largest Saturday night for the 2015 season, trailing only Kentucky Derby Day when more than $1.3 million in handle was recorded.

Jeff Boone and Associates Auctioneers provided all services for the night as a gift to the event, which also included online bidding and live streaming bidding during the live auction. The auctions brought in a total of $87,250 with the highest item, a one of a kind Billy Lopa painting, bringing $30,000.

“It was by far the largest single day fundraiser in the history of PDJF and far surpassed the amount raised in the inaugural Jockeys & Jeans event,” said Brian Elmore, vice president of racing for Centaur, Inc. “Jeff Boone’s auction company donated all of their time and resources and they did an outstanding job. We are humbled at the response and support, and I am so proud to work for a company that is this invested in horse racing. Indiana Grand and Centaur, Inc. have been behind this event from day one and their commitment to racing is unparalleled.”

The evening was capped off by a special presentation from Helping Hands for Freedom. Patrick Shannon, co-founder of the organization and also a Purple Heart and Bronze Star recipient, presented PDJF with a check for $10,000 to assist the cause. Helping Hands for Freedom assists military families during injury, loss and/or deployment and Shannon pointed out that they are very aware what injuries can do to an individual and their families. He was joined by Fred Liggett and David Roth to make the presentation to Nancy LaSala, executive director of PDJF.

“The goal of Jockeys & Jeans from the very start was to raise money and awareness for PDJF, and we are overwhelmed at the support brought in by everyone involved,” said Jon Schuster, vice president and general manager of racing for Indiana Grand. “Getting such a national response from the legendary jockeys that were in attendance to show their support for PDJF was a great boost. PDJF supports over 60 disabled riders and having some of those jockeys at the event was also very gratifying. We are so grateful to everyone who contributed their time, skills and resources to make this event such a huge success.”