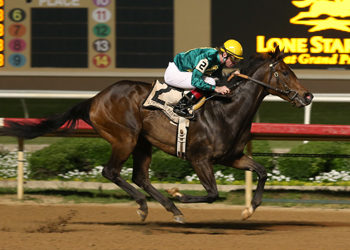 Lone Star Park on Saturday presented two divisions of the Texas Stallion Stakes for 3-year-olds, and favorites scored big wins in both races.

Infectious, bred and owned by W. S. Farish and trained by Danny Pish, took the prize in the $75,000 Got Koko division for fillies.

“She really enjoys her job and goes out there and gives her all,” said Pish. “It’s a pleasure to have one like that in the barn.”

This was the second win in this division of the Texas Stallion Stakes at Lone Star Park for trainer Danny Pish. He won with Formal Flyer in 2008.

With all-time leading Lone Star Park rider Cliff Berry at the reigns, Infectious was content to settle off the pace set by Santacafe, made a bid on the far turn while three wide, took the lead near the three-sixteenth pole, and drew away to win by three and one quarter lengths.

“We just sat and watched (the pace) we were in a perfect spot,” said Berry. “When I asked her to run a little bit, it took me a little while to get her going, but when she did, she went on.”

With the winner’s share of the purse, Infectious upped her career earnings to $115,219. This was her third win from eight lifetime starts. Infectious is a daughter of the pensioned stallion Valid Expectations, the all-time leading sire in Texas.

Named for owner Brad Grady’s son Mason, Supermason went right to it in the $75,000 Stymie division for colts and geldings, gaining the lead in the first turn, setting the pace while well rated, and controlling the action while inside on the far turn. Jockey Lindey Wade turned to check the competition approaching the quarter pole. He drew off into the final sixteenth under strong urging, then was hand ridden to the finish and was must the best.

“The key to him is to get him away from there good. That way he has a chance at the lead early and its home free from there,” said Wade. “About the half mile pole I was able to get him off the bit and drop my hands, so I wasn’t fighting with him going into the turn which was key, if you ask me, that way at the head of the lane he responded when I asked him to.”

Supermason, a gelding by Lane’s End Texas stallion Grasshopper bred by W.S. Farish and E.J. Hudson Irrevocable Trust, increased his career earnings to $143,755. This was his fourth win from 11 starts.

Winning trainer Bret Calhoun and winning jockey Lindey Wade both posted their third win each in this division of the Texas Stallion Stakes at Lone Star Park. The pair teamed to win in 2014 with Ibaka. Wade’s other win was in 2011 aboard Halifax Flyer and Calhoun also won previously in 2010 with Coyote Legend.