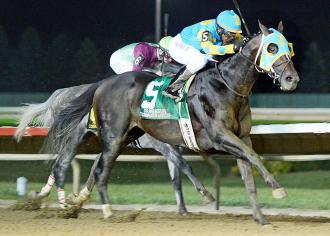 A talented and wealthy field will test the $175,000 Governor’s Cup on Saturday night at Remington Park as the season’s stakes schedule gets underway. First race Saturday night is at 7pm (central).

Owned by Zayat Stables of Hackensack, N.J., and trained by Steve Asmussen, Prayer For Relief enters the Governor’s Cup off a win in the Grade 3, $300,000 Cornhusker Handicap in late June. Jockey Ricardo Santana had the mount that night and keeps the assignment on the 7-5 morning-line favorite Saturday.

“Prayer for Relief is a slight favorite over Alternation based on what he’s done this year,” noted Remington Park odds-maker Jerry Shottenkirk. “Prayer for Relief comes off a sharp win in the Cornhusker Handicap at Prairie Meadows in Iowa and has two other second-place finishes this year. Alternation beat Prayer for Relief by a nose in this race last year then failed to hit the board in two races at Oaklawn. He has been off since April but has been training well for this.”

Alternation will defend his 2012 Governor’s Cup while coming off a layoff of four months. Owned by Pin Oak Stable of Versailles, Ky., and trained by Donnie Von Hemel, the 5-year-old has made just two starts in 2013 with no top-three finishes. He spent his spring racing at Oaklawn Park and was off-the-board in both the Grade 3 Razorback Handicap and the Grade 2 Oaklawn Handicap.

Jockey Luis Quinonez has been Alternation’s only rider since late in 2011 and has the engagement for his return in the Governor’s Cup. Alternation has won nine of his 18 career starts with one second-place finish and one more finish in third. A pair of his wins have taken place at Remington Park. Overall, Alternation has banked $1,054,227.

Prayer For Relief has won six of 21 career attempts with five runs for second and another four in third-place. He has the edge over Alternation in career money, having earned $1,419,725.

Other notables entered for the Governor’s Cup: Stachys, a winner of nine career races with two of them locally; Brethren, winner of the $125,000 Evangeline Downs Mile in Louisiana on August 10, a week before the Governor’s Cup; and Worldly, an earner of more than $318,000 overall and the third-place finisher in this race last year.

The Governor’s Cup is the eighth of nine races on Saturday night at Remington Park, scheduled for 10:16pm (central).

Remington Park fans will have extra opportunities to win Saturday night with Cash Giveaways throughout the racing program. Guests may enter the drawings to be eligible for the Cash Giveaways in the Racing Entrance Lobby beginning at 5pm.