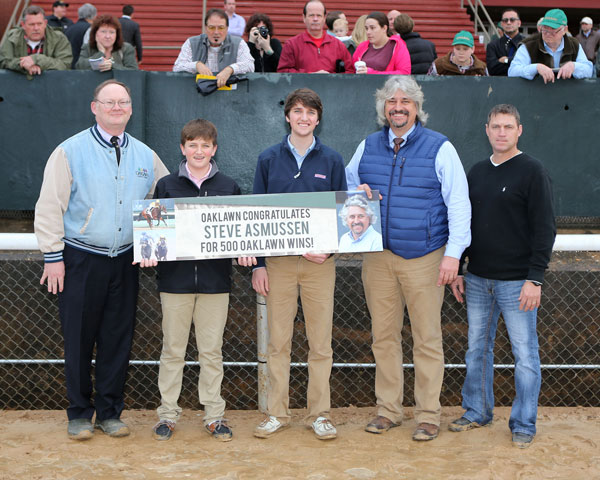 The late Bob Holthus – nine Oaklawn training titles between 1967-1991 – and four-time Oaklawn training champion David Vance, who won a single-season record 50 races in 1974, are among only a handful of other trainers with 500 career victories in Hot Springs.

Hence was also the 7,500th North American victory for Asmussen, who trails only the late Dale Baird (9,445) on the all-time career list.

“It’s a great win here, it really is,” Asmussen said. “Oaklawn has always been very good to us and hopefully that will continue. Seventy-fifth hundred lifetime and 500th at Oaklawn, I kind of thought that was neat. Hopefully, we’ve got another 500 wins in us here.”

Asmussen won the $75,000 Honeybee Stakes (G3) in 1999 at Oaklawn with Dreams Gallore, who would become the trainer’s first Grade I winner later that year in the $250,000 Mother Goose at Belmont Park.

Curlin, in his first start for Asmussen and straight from a dazzling career-debut victory at Gulfstream Park, won the $300,000 Rebel Stakes (G3), Oaklawn’s major local prep for the Arkansas Derby.

“You talk about taking it to a different level,” Asmussen said.

Curlin was named Horse of the Year in 2007 and 2008 and retired as the all-time leading money winner for a North America-based horse ($10,501,800). The colt also provided provided Asmussen his first Triple Crown victory (2007 Preakness). The trainer’s third came in last year’s Belmont Stakes with Creator. It was Asmussen’s first Belmont victory.

Asmussen, who was inducted into the National Museum of Racing Hall of Fame in August, had his 7,000th career North American winner April 1, 2015, at Oaklawn, according to Equibase.