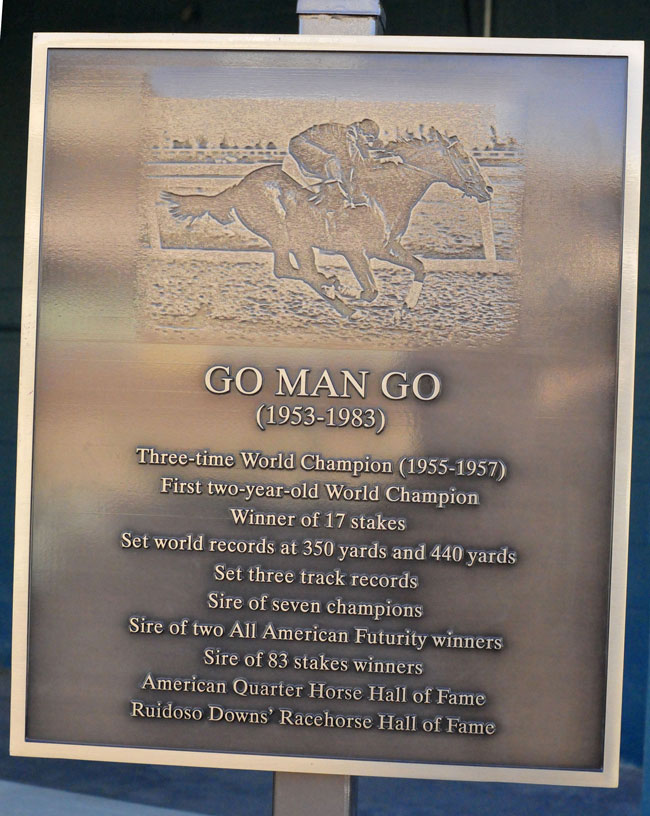 The Go Man Go grave and memorial is now complete by the Ruidoso Downs’ infield winner’s circle, which will now be called the Go Man Go Winner’s Circle.

A bronze plaque that explains Go Man Go’s historic accomplishments was added on Tuesday at the New Mexico track. The site is open to the public and photos are encouraged.

Go Man Go had been buried at the former Buena Suerte Ranch, the last stop of his breeding career, in Roswell, New Mexico. He died there when he was 30-years-old in 1983. Earlier this year his remains were exhumed and cremated. The majority of the cremated remains are buried at Ruidoso Downs’ gravesite and a small portion is in the Ruidoso Downs’ Racehorse Hall of Fame.

Go Man Go was a three-time Quarter Horse world champion (1955-57) and the first 2-year-old world champion. He won 17 stakes races, set two world records and three track records. He sired seven champions and 88 stakes winners, highlighted by two All American Futurity winners. He has been inducted into the Ruidoso Downs’ Racehorse Hall of Fame and the American Quarter Horse Hall of Fame.

There is always free parking and free general admission at Ruidoso Downs.